There's beef--nearly three pounds. There's bacon--at least a half a pound. There's cheese--16 pieces. And then there's one man ready to take on the "Betcha Can't" Challenge Wednesday, Feb. 15. And we want you to be there for it. 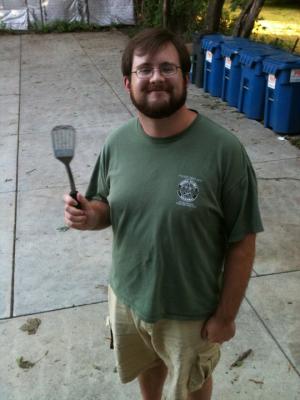 It starts with two words: "Betcha" and "Can't." It ends with eight 1/3-pound beef patties, 24 slices of bacon, 16 pieces of cheese, lettuce and tomatoes, and a half a pound of pub chips. And oh yeah, as some sick, dirty joke, a Diet Coke to wash it all down.

This is the Three B Saloon eating challenge that Erie Reader's own Alex Bieler will attempt to defeat 7 p.m. Wednesday, Feb. 15.

But before the challenge, came the "beer, bacon, and barbecue" that calls the corner of Fourth and Liberty home. General Manager J.J. Brown, who's been cooking all his life, saw the need for authentic barbecue in Erie, so he decided to open the restaurant two-and-a-half years ago that focuses on these three B's. A month into it, the Edinboro-native came up with the "Betcha Can't" challenge.

Inside of the Saloon, pictures, signs, and sports memorabilia adorn the walls and the smell of bacon and barbecue hangs so thick in the air, you can nearly taste the pepper and other spices when you breathe in and out, half-part welcoming, half-part tempting, full-on delicious. After you make your way through the sights and smells to belly up to the bar, where Brown guarantees they have at least one IPA, one Stout, one fruit, and then plenty others on draft, you'll notice the 4-foot by 3-foot whiteboard. One-quarter features specials. The rest of the real estate lays out the challenge.

"No one's completed eight yet," Brown says. "When someone does, then comes nine."

Rather than having multiple people complete the same challenge, which might strip the challenge of its luster, Brown ups the ante each time someone prevails by adding another 1/3-pound patty—and some more bacon and more cheese and more lettuce and tomato.

"Well now I have to do this," says Bieler after learning no one else has completed the challenge at this level. Editors' note: when we approached Alex about the possibility of the challenge, he willingly—and enthusiastically—agreed to give it go, so Erie Reader can't be held accountable for cruelty to writers. Besides, Bieler told us he had some experience.

"I already eat a lot as it is, so I have good life practice," Bieler says. "Back in high school, I could eat a whole pizza and side of breadsticks no problem."

With practice and experience comes knowledge and strategy.

"I am not dunking this in water. That's disgusting," says Bieler, a self-proclaimed foody, who's completed and defeated speed challenges before but never an amount challenge. "But I am going to drink a crap ton of water before for a couple of days, because if you drink a ton of water, it actually stretches your stomach out."

Independent research confirms that indeed drinking a "crap-ton" of water—official measurements recognized by Erie Reader—will in fact help Alex enlarge his stomach without bogging his body down with excess calories. But what he's still trying to figure out is approach.

"I'm still trying to figure out if it's better to eat a ton right away before my mind says 'you're full, you need to stop because you're an asshole,' or if I'll just try to time it out."

Talking minds over matter aside here, Bieler does have the beginnings of his plan laid out.

"I'm going to try to do the burger first," he says. "I think there's something different about if you look at a couple of chips left; they're so small, they can practically evaporate in your mouth."

Brown, who says he wants to see Bieler succeed, mentions that's exactly where one of the last eight-patty contenders hit the wall.

Although he hasn't tried the Betcha Can't challenge himself and says he enjoys watching others try more, Brown isn't afraid to give tips and hints in hopes of crossing off that "8" on the whiteboad to add a "9."

"I'm an eater from way back in the day. From Thanksgiving dinners, me and my brothers have learned because my mom would just make vats, huge things of food. 14-15-16 items of foods. Eat a lot four, three, two days away. After that, drink a ton of water the day and night before and then starve. Maybe eat a small breakfast to start your metabolism. Once you start your metabolism, your hunger builds, so by 6-7 o'clock you're ready to rock and roll. And chew a lot of gum. They say your jaw gets tired from chewing."

While Bieler, who's already planned out that water part, wants to defeat this challenge, he also respects it.

"It's an eating challenge for a reason; if it wasn't a challenge, it wouldn't be up there," he says. "I think it'll be fun for everyone else to see me in pain. I've already been telling some people that they have to go. Just yesterday, I was telling people on February 15, and they ask, 'what's February 15?' and I say, 'I am going to shove so much meat in my mouth that you will not be happy.'"

If Bieler does in fact manage to consume nearly three pounds of beef and a half a pound of a bacon—surely so much to make some people unhappy—as well as enough cheese for eight respectable grill cheeses and the rest of the lot, he'll come away with a T-shirt and his picture among the "Cans" section in Three B's. If he doesn't, he'll still get his picture on the wall—it'll just be among the "Can'ts," which as you're likely assuming, features many more than the "Cans."

To sweeten the whole experience, and in hopes of getting the crowd involved, Brown makes sure all the patrons know someone is attempting the challenge.

"When we get the burger, they're sitting in the back," he says. "We come through the front and make sure people see it."

Bieler believes the more people watching him stuff two types of animal into his mouth at one time will help him.

So when it starts with the two words: "Betcha Can't" and ends with eight 1/3-pound beef patties, 24 slices of bacon, 16 pieces of cheese, lettuce and tomatoes, and a half a pound of pub chips, Erie Reader invites you on behalf of challenger J.J. Brown and contender Alex Bieler to the Three B Saloon Wednesday, Feb. 15 to see if Bieler can get the best of the beef and bacon. For updates regarding the challenge, advice, tips, trashing talking, and more, check our website: eriereader.com and our Facebook page and follow our Twitter account.