Both Erie Vinyl and VinylMiners.com give Erie collectors space to talk discs.

by Matt Flowers
View ProfileFacebookTwitterGoogle+RSS Feed
December 11, 2013 at 7:09 AM 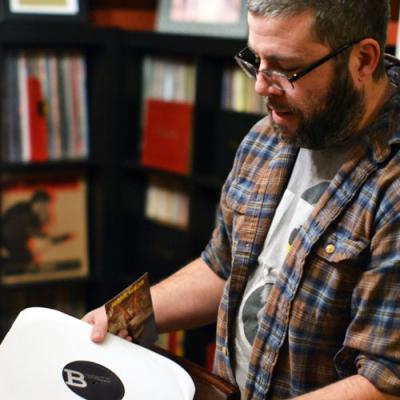 No matter how drenched in this circuitry culture we become, there is always a place in our hearts for something warmer than the glow of a computer monitor, something we can listen to without typing in a web address, and something that brings us together without a "like" button and a comment section. This is not to say technology doesn't foster community, culture, or the creative process – it definitely does – however, sometimes it's good to return to an old-fashioned approach to catch some warmth and ditch the web.

While we may be submersed in endless streams of music, tangles of headphones, and piles of pirated tuneage, a major movement towards the retro format of music is underway. There is no argument that vinyl sales still only make up a marginal fraction of overall music sales, but these cumbersome musical wheels are rolling their way back onto our lives.

For a while, you couldn't pay someone to take your vinyl collection. Digital music is a cleaner, space-saving approach to all the same songs. In the palm of your hand, you could carry the innards of an entire record store and then some. With the emergence of the digital word, vinyl sales dwindled down to almost nothing, reaching all times lows in '93 around 300,000 records. For over a decade these grooved, dust collectors stayed on the shelves, until a strong, sudden gust of retro-living blew these black slates of song clean again.

In 2008, 1.8 million vinyl records were purchased and the numbers keep climbing, as 2012 hit record highs with 4.6 million sold. So not to sound like a broken record, but there is something major happening here.

"I don't know why it's coming back – maybe nostalgia, maybe people are tired of not having a physical copy, and the artwork is big," says local musician and vinyl connoisseur Matt Texter. "There is such a difference when you're listening to records," he adds. "It's way more communal."

Last April, Jack White was appointed as the Ambassador of the sixth annual Record Store Day where he shared the same sentiment. "Out there, people are still talking to each other face-to-face, exchanging ideas and turning each other on," White says in his 2013 interview on Recordstoreday.com. "There is beauty and romance in the act of visiting a record shop and getting turned on to something new that could change the way [we] look at the world, other people, art, and ultimately, [our]selves."

Matt and Jack have never met, although they do share the same sentiments about this nearly obsolescent form of song. "A few people I knew were into records and I thought – because they started a vinyl night at the crooked i – I should start a group that can talk about collecting locally."

Not only did he start a Facebook group for this communal passion dubbed "Erie Vinyl" – a place to share and swap stories, hot spots, and the latest finds – but he also started a podcast, VinylMiners.com with friend Wayne Anderson, whom he met at one of these crooked i vinyl nights. Between Erie Vinyl and VinylMiners.com, Matt is hoping to foster a community based on this passion for music and its retro forms.

Not only is your neighborhood record store,  such as Graham's Records [613 W. 26th St.] or The Exchange [7100 Peach St.], a great place to visit to get a new look at these old-fashioned slabs, but Erie has plenty of thrift stores to go digging through.

"I do a lot of 'thrifting,'" Matt says, but anyone who is in the market for a good deal on great music is tired of sifting through the same dusty Christmas albums. "The real secret," he smiles, as if a treasure map hides behind his big black beard, "is going all the time." Because of this resurgence of records, digging and thrifting has become extremely competitive, especially when there is a chance to find a diamond in a rough; a first issue or a full collection.

"There is a lot of digging to do in Erie, but there are a lot more people on the field." It's gotten to the point where Matt actually recognizes his "competition" when they're at the store getting the first shot at the rare issues or have already picked through the selection. "When you go enough you start seeing and can tell what's different because once you dig through it five times, you're like 'someone has already been here, or there's nothing new.'"

In his treasure hunting, Matt came across one of these diamonds in the rough, a first issue – one of only 25 printed of an obscure band from Sharon, Pa. named Drywater. His initial investment was 49 cents, but after a whole lot of research he realized it was worth a whole lot more.

Matt reached out to Drywater's label RPC to get the low down on this strange record titled "Backbone of the Nation," its ocean view, sad sky blue, cover adding to its mystery. He ended up selling the record to a collector for $900 and got over $100 in trade from RPC because this vinyl carried a lyric insert that was missing from the other 24 copies that existed in the world.

After he slips his re-issue Drywater's vinyl back onto his shelf, next to the other 2000 LP's - organized with red dividers by genre – he pulls out Jack White's album "Blunderbuss," a vinyl that meets modern times by providing a digital download.

"I'm not a purist, I have all these records, but I still have probably 25,000 MP3s on an external hard drive and a few hundred CDs… It's really about the music to me," Matt says.

"When you're by yourself, [putting on a record] is sort of ceremonial, but when you're with people it's weird because the records becomes a focal point, the music becomes a focal point. Whereas MP3s can play in the background and you can have all this wonderful, endless, 50 days of music lined up, but when records are on, it's like a fire or something.

It is these embers from the past that this community can congregate around. Vinyl collectors not only have love for their music but the willingness to give it their full attention. It is that warmth in the middle of the room, emitting soft waves of sound to their ears. Records play their way inward as if to present their soul to the listener in contrast with their future counterparts, which seem to stream endlessly in no particular direction, forever. But no matter what the music's vehicle, it's important to remember why we're even taking the ride.