How one of Erie's irrepressibly messy delicacies came to be 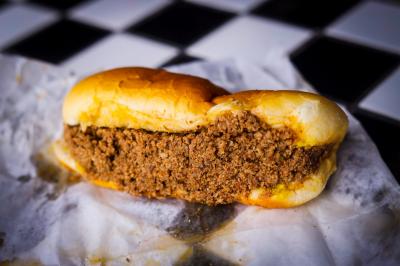 Jessica Hunter
Greek dog has a different meaning depending on where you are, but in the Erie area, it's unmistakable u2014 a Smith's wiener garnished with less-than-lean ground meat Greek sauce, slow-simmered and generously seasoned.

According to the Hot Dog & Sausage Council (which I bet throws some delicious holiday parties), over $3 billion is spent annually on hot dogs at United States supermarkets. People simply love hot dogs. Journalist H.L. Mencken, who once called them "rubbery, indigestible pseudo-sausages," later had a change of heart, saying that they had been elevated to an "art form." Betty White credited hot dogs (and vodka) for her long life. Maya Angelou loved hers with an ice-cold Corona. Anthony Bourdain preferred his with mustard and sauerkraut. Even for those who've seen the infamous YouTube video with 88 million views showing how hot dogs are made, for many, a good hot dog is difficult to resist (and even for those who don't eat meat, there are plenty of meatless options nowadays).

In Erie, the hot dog that inspires the most passion is undoubtedly a Smith's. And of all the ways to fix Smith's famous frankfurters, it's the Greek dog that gets the most glory — a skinless wiener on a warm, slightly squished bun, smothered in onions, mustard, and that glorious, greasy, savory, unforgettable Greek sauce.

For those who grew up in the Erie area, it was likely one of those local foods that you thought were everywhere until you began traveling and noticed that hot dogs, hamburgers, and French fries weren't offered Greek-style elsewhere — or if they were, the item you ordered might arrive at your table much different than expected, bearing little resemblance to Erie's famous frank.

In 2012, renowned food writer J.M. Hirsch described a Greek dog inspired by spanakopita. This Greek dog is layered with feta cheese, diced yellow onions, dill seeds, tzatziki, and sautéed spinach. In Salem, Oregon, a once-popular hot dog joint named Capitol Dog smothered their Greek dogs (described in their local paper as a "delicious mess" that required a fork and a knife) with artichoke hearts, tomatoes, cucumbers, onions, olives, feta, and a vinaigrette. There are similar examples throughout U.S. cities with their own unique "Greek" twist on the hot dog — but few with that name resemble Erie's.

Instead, Erie's Greek dog is part of a long and connected lineage of immigrant-created regional hot dogs. During the late 19th and early 20th centuries, German, Polish, Italian, and Greek immigrants, among others, operated hot dog stands across the country that helped increase their popularity. Jewish vendors also expanded their reach by offering kosher all-beef dogs. The competition between these vendors inspired innovation as they competed for customers, discovering new toppings and flavors to add to their dogs. Soon, regional styles began to emerge, among them: Chicago dogs, Coney Islands, slaw dogs, Rhode Island hot wieners, Maine red snappers, southwestern Sonoran dogs, and D.C. half-smokes.

According to Becky Mercuri's The Great American Hot Dog Book, as early as 1913, Greek vendors were using mustard with a unique Greek chili sauce on their hot dogs. Around this time, they were also sharing their knowledge and recipes with other Greek immigrants who were starting their own stands and tweaking recipes. "Some immigrant groups, notably the Greeks, formed networks and even provided a basic 'Coney Island' sauce recipe to friends and associates seeking to establish hot dog eateries," Mercuri explains. These networks are why so many regional dogs, while distinct in flavor to the hot dog connoisseur, still share many similar characteristics.

In 1964, Erie Daily Times columnist Gene Cuneo mentioned Greek hot dogs by name for the first time in the local paper. He described them as similar to Buffalo's Texas Hots (sometimes called a slime dog) or the more well-known Coney Island hot dog, both of which were also innovated by Greek immigrants. Years later, Gene's son Kevin Cuneo wrote a love letter to the Greek dog in his own Erie Daily Times column. In it, he argued that a Coney Island was more of a chili dog and that Greek dogs were topped with a distinct sauce, not chili, an assessment that remains popular today.

He also noted that the sauce was "darn near impossible" to duplicate at home. Part of this near-impossibility is likely because there are numerous recipes for Greek sauce across Erie restaurants. Some of the recipes can be found online or in old local newspapers while other Greek sauce recipes remain a family secret. Most include a less-lean ground hamburger (the grease is part of the flavor, after all), but I've also seen some include a mixture of ground lamb as well. Some swear it must include tomato sauce, while others argue that true Greek sauce does not. Blends of spices differ slightly from recipe to recipe as well, although almost all include a lengthy slow-cook on low heat.

In a 1991 article, when the Greek dog was already a beloved staple of the Erie Greek Festival and We Love Erie Days, reporter Chuck Eschweiler noted the superiority of Erie's Greek dog to other regional hot dogs. "They're sloppy, greasy, and loaded with cholesterol, empty calories, and sodium," he wrote. "But so what? They're great."

Erieites must continue to think so… even after they've moved away. Gordon's Butcher & Market packs and ships an Erie Greek Dog Box anywhere in the United States. One can also buy the locally-made and bottled Pulos Original Greek Chili Sauce in stores or online. In Erie, dozens of restaurants have Greek dogs, burgers, and fries on their menu, including Red Hot Restaurant, Panos' Restaurant, Lucky Louie's Beer & Wieners, Triple D's Tastey Grill, Stevo's Pizza, Ringside Restaurant, Rum Runners, McGarrey's Oakwood Cafe, One Way Inn, Alfee's Pizza & Sub Shop, and just about every local dinor. Most of these sauces are homemade and slightly different (some even substitute cheese for the mustard), but all are worthwhile.

The pinnacle though is Erie's beloved New York Lunch, which first opened in 1927 and has been owned and operated by Nina and Stephen Paliouras for the past 52 years (along with the help of their son, Constantine "Gus" Paliouras, and staff). Jim Martin wrote in the Erie Times-News about New York Lunch in 2019, noting how Nina believes loyal customers and great staff are why they have been so successful. Certainly, that loyalty is in part due to the welcoming atmosphere (where you will often see Nina and Stephen themselves), but certainly, one can assume that their delicious, savory sauce (which Martin described as "cauldrons … which begin with about 80 pounds of ground meat … made two or three times a week") plays a part as well. It also doesn't hurt that the Peninsula Drive location of New York Lunch, on the other side of town, has a drive-thru.

In many ways, the history of the hot dog is the history of us: our communities, our people, where we come from, and, of course, loyalty to our local flavors. Bruce Kraig describes in his book Hot Dog: A Global History how the hot dog has become a symbol of American identity. "When Americans eat hot dogs," Kraig writes, "they are celebrating their common identity, making the little sausages all the better-tasting." So, the next time you're munching on one (or two… or three) of those mouthwatering Greek dogs, wherever in Erie you get them, don't fret over the calories and sodium. Instead, remind yourself that you're merely partaking in a celebration of Erie culture and history — a celebration of us.

​​Jonathan Burdick runs the historical blog Rust & Dirt. He can be reached at jburdick@eriereader.com