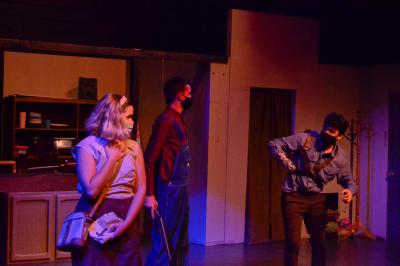 "Hail to the king, baby." Equal parts schlocky and gruesome, Sam Raimi's Evil Dead film trilogy has had a demonic vise-grip on horror fans' hearts since 1981, continuing to rule genre "best of" lists 40 years after its theatrical release. One of those fans — Canadian playwright and comedy writer George Reinblatt (born 1977) — was so possessed by its charms he eventually made a musical of it, unleashing it on Toronto's Tranzac Club in 2003. It seeped over the border to an Off-Broadway run in 2006, quickly becoming an international sensation just like its source material.

Evil Dead The Musical roughly adapts the first two films in the Evil Dead trilogy (Evil Dead and Evil Dead 2: Dead By Dawn) into a blood-splattered smattering of song and dance numbers prominently featuring badass protagonist Ash Williams (famously portrayed by Bruce Campbell in the movies) and his demonic adversaries. The premise is a familiar one — a visit to a remote cabin in the woods accidentally awakens an ancient terror — but the execution, brilliantly blending horror and comedy, has rarely been matched. The musical features diabolical witty ditties such as "Do the Necrinomicon," "All the Men in My Life Keep Getting Killed by Candarian Demons," and "What the F**k Was That?"

Gannon University's Schuster Theatre will bring Evil Dead The Musical to life for seven performances this October, directed by Angela Howell. Viewer discretion is advised due to adult language, themes, violence, and simulated gore. Do wear a mask (the entire time), but don't wear anything you are too attached to either, as the musical contains "seriously a lot of fake blood."

We suppose that's one way to obtain your recommended daily iron intake. Groovy.