Exile on State Street: A Lump of Coal from the City of Erie for Christmas this Year

Raising taxes is the easy answer to an increasing budget -- but is it the right one? 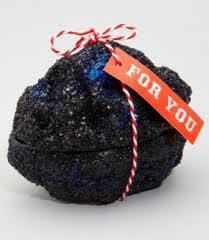 Well, it looks like the citizens and taxpayers of the City of Erie can once again break out the eggnog to celebrate the recent Christmas present we received from Mayor Joe Sinnott and five members of City Council. In the face of decreasing revenues and increasing costs, the mayor and a majority of City Council came up with a truly innovative and creative way to deal with the City's budgetary problems.

Their solution? Raise taxes once again on the citizens and taxpayers who are already overburdened and underserved.

Recently, City Council voted 5-2 to approve the mayor's budget, which included another 7.3 percent tax increase. To their credit, Councilmembers Dave Brennan and Jessica Horan-Kunco voted against the budget. This latest increase is on top of the 14 percent tax increase the City delivered to taxpayers in December 2012 – more than a 21 percent increase in just three years!

These people just don't get it, do they? As I have illustrated in past articles, the City's tax environment is down right abysmal, particularly when compared to our "competition," the metro suburbs.

Frankly, with a shooting nearly every day, it really takes gall on the part of the city administration and council to shove this tax increase down the throats of its citizens. Council never even lifted a red pen to the budget, making not a single cut. And, to add insult to injury, the City claims to be sitting on top of over $8.5 million in reserves.

Back in the day, Mario Bagnoni would be pounding his fist and demanding cuts. I never thought I would say it, but I truly wish we had a Mario Bagnoni on City Council. At least someone would be looking out for the interests of taxpayers. But not these guys. It's business as usual in a void of leadership that is bereft of any creative ideas to handle the City's fiscal problems. In fact, this action shows how utterly clueless the city administration and council is to the negative tax environment that exists in the City.

And does anyone even seem to care? It appears that most people who can do so have already left the City. Our neighborhoods are in an unrelenting downward decline, which underscores the City's primary budgetary problem. That is, that the City is no longer attractive as a choice of residence or as a business investment, largely due to its tax environment. When people no longer believe that it's worth investing in the city, flight occurs and property values decline. And with the City piling on even more taxes, the vicious cycle continues relentlessly.

So we have a City with extraordinarily high taxes, low property values, and a glut of tax-exempt property. Folks, there is no way the City can get out of this problem by raising taxes. It's really not even a short-term fix because it compounds the problem long-term.

Wouldn't it be refreshing if the people that are supposed to be representing us actually came up with some unique and even radical ideas to stop this vicious cycle? Even if only a few of our elected officials had some starch in their backbones and brought some ideas up for discussion, some realistic alternatives that focus on increasing other sources of revenues and cutting costs might be found.

So, as the administration and council have delivered us a lump of coal for Christmas, I thought about a few things that might be on my New Year's resolution list for the City. Here are a few ideas the City could resolve to explore in the new year to address its budgetary problems. None of these are new, and you've heard me mention them before. But let's at least get a conversation going.

For starters, we get the same tired responses from the administration and council. Pensions and employee costs are at the root of the expense side of the equation and declining taxes are the cause of the reduction on the revenue side and there's nothing that can be done. No fat in this budget we always hear. Let's look, then, at two major components on the expense side that are within the power of the City to affect.

First, employee costs, including pensions. When I was in office, we formulated an innovative retirement package to encourage long-time workers to retire. These workers could be replaced by new employees at reduced salaries, or not replaced at all. It was called the Deferred Retirement Option Plan, or "DROP".

We used an employee's own pension funds to create an incentive for retirement, not tax dollars. The result: More than a hundred City employees, at the time only fire and police, accepted the plan. Coupled with other incentives, we were able to reduce the total City work force by about 200 employees, virtually all through retirements.

A similar plan should be offered to the blue-collar and AFSCME employees. The immediate benefits are apparent, and this gift keeps on giving in terms of reduced employee costs over the long-term.

Also on the expense side, the City should finally adopt and implement an automated payroll system. Yes, folks, believe it or not, the time clock actually came and went as a piece of technology, passing the City by.

When I was mayor, we attempted to implement the automated payroll system to reduce time theft and uncontrolled overtime. Council fought me on it, and it was never adopted.

Nine years later, the City still does it the old-fashioned way, essentially an honor system, particularly for police and fire. Folks, before we raise taxes, let's at least get the City's payroll system out of the 19th Century and at least into the 20th Century.

The revenue side presents more problems, but at least the City could be working on it. Recently, the Erie Times-News published a great story on the salaries of CEOs of some of the major tax-exempt organizations, particularly the colleges and hospitals. The amount of money these people are being paid is obscene in the sense that they argue they are "charitable organizations."

If the legislature refuses to address this issue, then the City needs to take legal action against these entities to ensure that they are paying their fair share of taxes. Can anyone justify a "charity" paying hundreds of thousand of dollars in executive compensation when we don't even have enough cops on the streets to prevent violence?

At least the threat of such action might get these organizations to the bargaining table. And I am not talking about donating a police car. I am talking about paying at least a 50 percent payment in lieu of taxes or more. These entities can afford it. How about the retired homeowner on a fixed income living in the central city? These folks are paying more than their fair share of taxes while these "charitable organizations" essentially get either a reduced rate or a free ride.

There are other revenues the City should be after. The hotel room tax comes to mind. The mayor should be at every Convention Center Authority meeting demanding a cut of the room tax to pay for increased police protection and City services. Instead, when the county hotel issue surfaced earlier in the year, not a whimper was heard from this administration, and the City got zilch.

The beauty of this tax is that it's truly regional; in fact, it's beyond regional because the vast majority who pay it are from outside the county. It's really a form of countywide revenue sharing. But instead of getting these people to pay their share, this administration and council goes back to the same well.

Unfortunately, my friends, the well has all but run dry. We are in a downward spiral that will require radical action to turn the tide.

The administration and council delivered us a Christmas present we did not want. My resolve for the new year is to continue to drive these ideas in the hope that maybe, just maybe, a leader will rise to the surface and grapple these issues head on. There is still hope for the City, but as the year winds down, it's clear that that hope for this once proud city is disappearing just as quickly.