Experience the Mind of Michael Che at Penn State Behrend 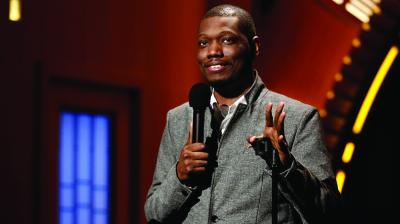 Comedian Michael Che will be gracing the Junker Center stage at Penn State Behrend. This event is open to to public, with discounted tickets being provided to students of the university. Che has been performing on the stand-up circuit for years, including Funny or Die's Oddball Festival, but most are likely to recognize him now from Saturday Night Live, where Che is not only a co-headwriter, but an anchor alongside Colin Jost on the show's iconic Weekend Update segment.

Che's credits stretch beyond Saturday Night Live, however, and the groundwork he laid for that gig is equally as impressive. Che first worked as a news correspondent for Comedy Central's The Daily Show with Jon Stewart. The comedian also had the opportunity to perform stand-up on late nights shows hosted by the likes of Seth Meyers and David Letterman before releasing his first hour-long special, Michael Che Matters, on Netflix. Most recently, following acting stints in Comedy Central's @midnight and the Chris Rock directed film Top Five, Che co-hosted the 70th Annual Primetime Emmy Awards. Regardless of whatever new material Che is likely to be working, there's no doubt that audiences are getting one of the country's most relevant comedians at the peak of their career. — Aaron Mook