Fall in Love and Start a Band on Sing Street

Sing Street's mix of drama and comedy will appeal to fans of musical spirit-lifters with a slightly punk rock edge. 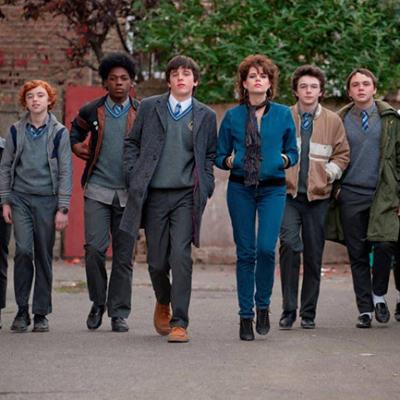 Instead, boy asks girl to star in a music video for his imaginary rock band. Boy then scrambles to assemble said rock band.

Rock and roll and romance ensue.

That's pretty much the premise of John Carney's 2016 crowd-pleaser Sing Street. It's also set in Dublin in 1985, so you can expect a vintage-cool array of silly wardrobes and accessories. As the object of affection, actress Lucy Boynton looks like a teenage Kate Bush – complete with huge hair and goth eyeliner. In keeping with the nostalgic spirit, the soundtrack fluctuates between underground chic (The Jam, The Cure) and lovable cheese (a-ha, Spandau Ballet).

Sing Street's mix of drama and comedy will appeal to fans of musical spirit-lifters like Pitch Perfect, albeit with a slightly punk rock edge.

Along the way, our young hero must also deal with the demise of his parents' marriage and bullying at school: themes that will resonate for anyone who was awkward at that age. Sing Street's mix of drama and comedy will appeal to fans of musical spirit-lifters like Pitch Perfect, albeit with a slightly punk rock edge.

Director John Carney is becoming an old pro at the rock-and-roll romantic comedy. His cult classic Once (2007) told the story of two buskers falling in love with earnest, lo-fi charm. He returned to similar themes with the star-studded Begin Again, this time with Keira Knightley as a singer-songwriter recovering from a rough break-up. Sing Street brings him back to Ireland (and the era of his youth) to tell an endearing story about love and music.

Expect plenty of emotion – from the music, the characters, and especially the hairdos. – Dan Schank