Farragut North is the Perfect Play for an Election Year

What could be more cathartic than turning off your cell phone for a few hours and soaking in the betrayals, adultery, and backstabbing of a fictional election before returning (reluctantly) to the real one? 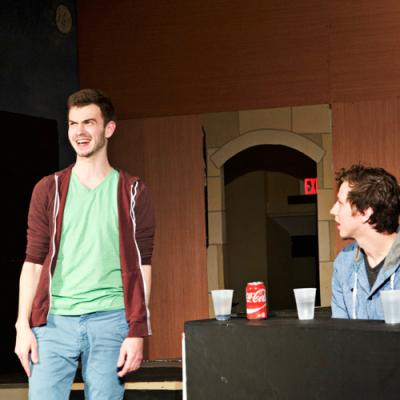 In 2016, political junkies are hardly in need of a fix. The drama of our upcoming election rarely dips below a fever pitch – offering violent campaign protests, secret email servers, JFK assassination conspiracies, and a still-shocking level of xenophobia on a daily basis.

Beau Willimon's Farragut North captures the malevolence and cynicism of our time quite accurately. In fact, Willimon has become one of our era's defining chroniclers of political treachery.

Beau Willimon's Farragut North captures the malevolence and cynicism of our time quite accurately. In fact, Willimon has become one of our era's defining chroniclers of political treachery. In 2011, he helped George Clooney turn the play into The Ides of March, a feature film which paired Clooney with Ryan Gosling. Next, he created the Netflix series House of Cards, which offers one of the most venomous takes on American politics in TV history.

When Zach Flock, the artistic director of Dramashop, decided to bring Farragut North to Erie last year, he deliberately chose to stage it at the height of the election drama. Since the play takes place, in his words, in "one of those worlds where you're not sure whom you can trust and where everybody's got a secret," he assumed there would be interest in the "heightened reality" that the production offers.

But he couldn't imagine the degree to which this "heightened reality" would be matched by actual reality. "Nobody knew that the election would be as dramatic as it is. So, in some respects, maybe the drama in this play is not as surprising as it would have been a year ago," he says in a humorous tone.

For my money, this makes the play more relevant than ever. What could be more cathartic than turning off your cell phone for a few hours and soaking in the betrayals, adultery, and backstabbing of a fictional election before returning (reluctantly) to the real one? – Dan Schank