Ferguson goes up in flames, but what does that change? 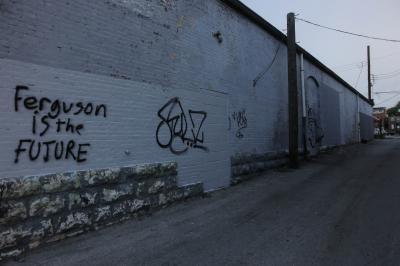 There's never been a day in this country that race didn't matter.

Monday in Ferguson, Mo. was no exception.

The death of Michael Brown served as a punctuation on decades of problematic race relations between a predominantly black community and its predominantly white police force.

The protests and destruction that followed the announcement by St. Louis county prosecutor Robert McCulloch serve as an amplification of community indignation and failed negotiation.

Much of America joined in the discussion via social media in the hours leading up to and following McCulloch's delivery of the grand jury's decision that no indictment would be levied against Ferguson police officer Darren Wilson, the man who shot and killed Michael Brown.

In Ferguson, that intensity turned violently inward as community activists dismantled the very community that they claimed to be rallying to save.

This country has seen similar reaction before - in 1965 in Watts, in 1968 in Chicago, Philadelphia, Detroit, Washington DC and numerous other cities, in 1992 again in Los Angeles - and never has the result facilitated greater communication, greater understanding, or a stronger sense of community on the other side of riots, looting, and arson.

"Property is not more important than people," one young demonstrator told NPR.

But neither is the destruction of one's place in reaction to the loss of life.

There is no doubt, the prelude to the announcement of the grand jury's decision and the installation of what was effectively martial law, could not have been more poorly handled.

Demonstration organizers had little communication with Ferguson officials, the same officials who preemptively called in the National Guard, warned of the use of tear gas, and prepared for mass arrests.

To compound matters, officials delayed the announcement until 8pm.

Ferguson became a self fulfilling prophecy.

Now, just as officials set the stage for conflict, demonstrators have paved the way for greater isolation and limited external assistance once the flames and smoke subside.

Watts remained a charred reminder of decades past when it burned again in 1992. Parts of Philadelphia, Washington, Chicago, and Detroit went unrestored for decades.

For Ferguson, the scars of this battle will likely persist long after the memory of Michael Brown, the pictures of the protests, and the social media chatter have all faded into the annals of American history.

And tomorrow, a young man will still be dead, the man who killed him will remain free, and race continues to matter.