French postmodernism at its finest. 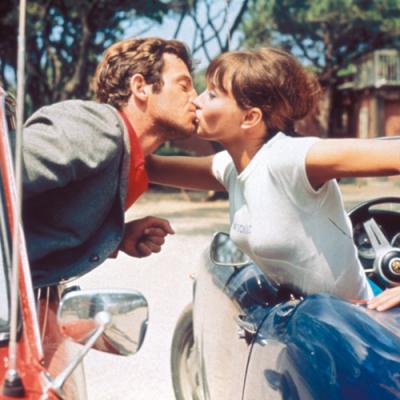 On paper, Jean-Luc Godard's Pierrot Le Fou tells the story of two criminal lovers who abandon their middlebrow lives to set off on a wild reign of terror through the countryside.

That description may call to mind Arthur Penn's Bonnie and Clyde – released three years later in 1967 – but Godard's doomed romance makes Penn's look like The Notebook. Both films are revered as anti-establishment classics, but Godard isn't only disgusted with polite society and its norms. He also refuses to let his audience live vicariously through the anti-heroes his film puts on display.

Pierrot's real venom is directed at the movies themselves. In particular, the way they offer incomplete engagements with fake people. Though the film stars two of the most iconic figures of the French New Wave – Anna Karina and Jean-Paul Belmondo – Godard treats them with the same detached skepticism he feels toward narrative in general.

Everything looks great in Pierrot – the pop-art color palette, the Mad Men-esque fashion, the wide-angle glimpses of the French Riviera; but these thrills are constantly and deliberately interrupted. Swelling music cuts out mid-scene. A corpse appears on a sofa as Karina flirts with Belmondo. Speech patterns shift gears in mid-sentence – sometimes sounding philosophical, sometimes sounding like TV commercials. Karina breaks into song on two separate occasions, but the movie isn't a musical.

"Postmodernism" is the category that historians use to identify this kind of mayhem. And in certain respects, we're all familiar with its legacy. Godard's casserole of jump-cuts, cultural references, and genre hybridity has been put to good use for decades on MTV. If you've ever watched Ferris Bueller's Day Off, you won't be shocked to see Karina "break the fourth wall" and address the movie audience directly.

What still seems startling fifty years later is Godard's refusal to play the game of empathetic engagement. I don't identify with any of the characters in Pierrot, and the film doesn't expect me to. When something bizarre occurs, I'm not forced to moralize it, or to connect it to a larger story arc, or to reduce it to a metaphor. Pierrot is playful, but never whimsical. I'm engaged, but not quite entertained.

Obviously, if you go to the movies to for escapism, you might want to sit this one out. But for the bravest among you, there's an openness to Pierrot that still feels radical. Godard's legacy is clearly visible in films ranging from Easy Rider to (500) Days of Summer. But these inheritors seem pretty timid by comparison. Though Godard's stylistic toolbox may make a certain scene feel trippy or quirky, I'm never really challenged to make up my own mind.

Watching Pierrot Le Fou, I'm reminded that there's still ample unexplored terrain at the movies. Though I don't well up with emotion in front of it, I do make unexpected connections between seemingly disparate topics like love, commerce, war, and art-making. As the credits roll, you might leave the theater with a headache. But you'll wake up the next morning with plenty of interesting questions – and possibly a clearer sense of how most movies try to manipulate you. – Dan Schank