Fits of Laughter Surround the Unexpected Fate of Sherlock Holmes

by Hannah McDonald
View ProfileLinkedInRSS Feed
September 25, 2019 at 10:30 AM 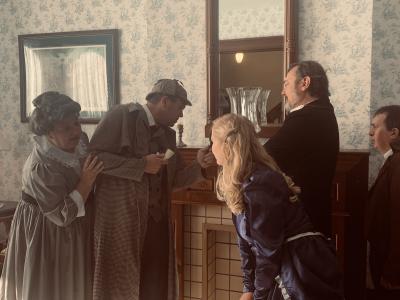 Where the classic story of Sherlock Holmes ends, another one begins — or at least according to playwright Charles Marowitz. Erie's All An Act Theater Productions takes attendees through the tale that starts with a death threat and ends with … just kidding, you have to see the show to learn how Sherlock's Last Case ends.

That's right, no spoilers for this Erie theater company's latest production. What can be revealed, however, is that the play centers on this aforementioned threat, supposedly sent to Holmes (played by Jawn Gross) by the kin of his late enemy Professor Moriarty. One of Moriarty's other family members warns Holmes before it's too late, causing a wildly unexpected plot twist.

This mystery, carefully crafted by the award-winning Marowitz, tests the iconic duo of Sherlock Holmes and Dr. Watson (played by Larry Lewis) while leaving the audience in fits of laughter more than a few times.