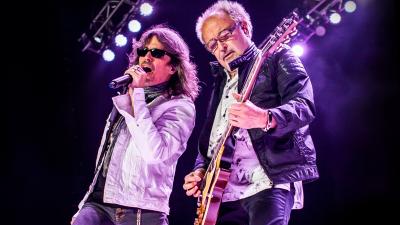 In 2004, Foreigner founder and guitarist Mick Jones was beginning to think about trying to form a new edition of his popular band, having dissolved the previous lineup after original singer Lou Gramm left in 2003.

It turned out to be excellent timing for Kelly Hansen, the former lead singer in the band Hurricane. He was ready to get back to life in a band.

"I decided to take a break and expand my expertise in different areas, like production and engineering and songwriting and artist development, those kinds of things," Hanson said, elaborating on his life after Hurricane. "But there came a point in time where it was working, but it was a diminishing returns situation, and I was kind of getting frustrated with that. It was getting harder and harder to make a living and do things like that. So I said to myself, I need to go back to what I do best and that's being a lead singer."

Having heard about a charity event Jones was going to play in Santa Barbara billed as Mick Jones and Friends, Hansen got curious about whether this was actually part of a restart for Foreigner and he made calls to some of his industry contacts. Eventually he was sent a set of Foreigner songs without vocals and invited to put his vocals on these tracks.

"So I spent about three days doing vocals on these tunes. Mick got to hear them in New York and they were coming out to LA to do some rehearsals," Hansen said. "I thought to myself I don't know why they're coming to LA, maybe they're listening to other singers. But if I'm in there first, they're going to pick me. If I wait until I'm last, they might pick somebody else. So I went in and we jammed for about an hour and a half. It was nerve wracking. These are big songs. But I remember I got home at 6 p.m., and they called me an hour later…They said 'We're booking shows for this week and can you start rehearsing tomorrow?' That's how we got together."

Hansen knew it would take a lot of work — and especially a lot of touring — to rebuild the Foreigner brand. But he feels this edition of the band has won the support of fans and is very much seen as having earned the right to be called Foreigner.

"We've made a lot of progress in the last 15 years. We've worked hard. We've really tried to deliver a high-energy, high-quality show," he said. "I do my very best to represent these songs faithfully every night, and it's not easy. They're challenging and difficult. But what I think has happened is people recognize that and they see that and they enjoy the show, hopefully."

Proving they are in fact jukebox heroes, Foreigner will donate $500 to the General McLane High School Choir, which will perform a 10-minute set of a capaella tunes prior to the show. — Alan Sculley