Frankenstein Reaches Through the Radio 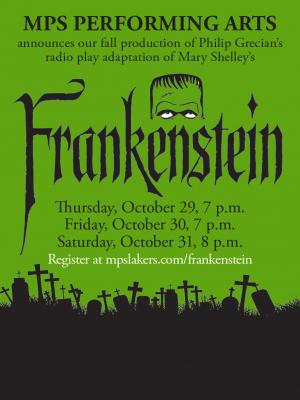 To say Victor Frankenstein erred in his approach to creating life is a gross understatement — his experiments gave birth to a creature so hideous, so reviled, and so infamous that the general population tends to forget the original artist. Just something to think about if you're thinking about specializing in the medium of reanimated corpse parts.

It's one thing to watch horror unfold; it's another to envision it. But during the Golden Age of Radio Drama, which stretched from the early 1930s to the late 1950s, it was commonplace. Utilizing nothing more than moody music, inventive sound effects, and compelling narration and dialogue, the best radio plays accomplished a whole lot with very little. During the years of the Great Depression and World War II, this was economical escapism at its finest.

Harkening back to that bygone era, Mercyhurst Prep students will resourcefully recreate the Shelley tale with just a handful of vintage microphones, a carefully curated selection of auditory props, and their own dramatic wits and talents. Carefully following the cues of playwright Philip Grecian's radio adaptation, the Lakers will offer three broadcasts in this unique format from Oct. 29 through 31. Registration is free.

Don't choke this rare opportunity away.