Freaky Friday Fires Up for Run at Erie Playhouse

Erie Playhouse presents their take on the Disney classic 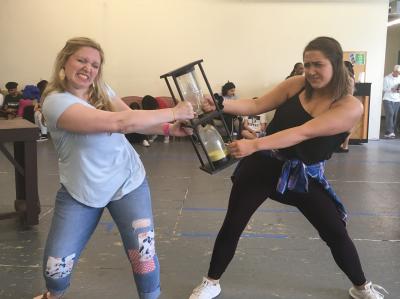 A startling and ground-shaking rumble in a Chinese restaurant one Friday night is only minorly concerning compared to the aftershock — a single-mother and teenage daughter have magically swapped consciousnesses, and no one has more than the slightest idea why. Such is the premise of Walt Disney Pictures' 2003 film version of Freaky Friday (one of four versions the company has produced in a 42-year span), in which Jamie Lee Curtis and Lindsey Lohan co-starred.

What is known is that the plucky story, which is based on the 1972 novel by Mary Rodgers, is coming soon to the Erie Playhouse. The delightful new musical tells the same story as the beloved novel and Disney movie, that of a feuding mother (named Katherine Blake in the theatrical version) and teenage daughter Ellie, suddenly in one another's shoes and forced to see the world — literally — from the other's eyes.

The two main ladies in this production are Leah Johnson as Katherine and Melina Walter as Ellie. Melina has been seen in shows all over Erie since beginning her theatrical run with Erie Playhouse Youth Theater. The cast, 32 members strong, is a mix of known faces and new talent of all ages. Johnson and Walter, both of whom are Erie Mainstage veterans, will stand alongside William Speros as Fletcher, Luke Bongiorno as Wells, Nicole Schneelock as Torrey, Barbra Vasquez as Adam's Mom, and Amanda Brown as part of the student ensemble, all of whom will take the limelight for the first time at the playhouse.

Freaky Friday the musical will run for three weekends with Friday (of course), Saturday, and Sunday showings each week, a Thursday showtime the first and second week, and a Wednesday production during the second. — Hannah McDonald