From One City 2 The Next at BT 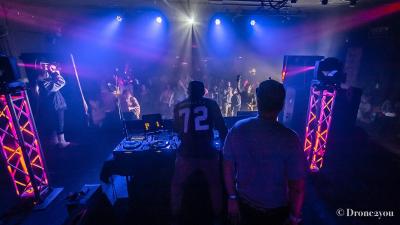 VOTO (Noah Voto) is back and better than ever this year as he brings a new series of EDM shows, "City 2 City," to Erie. Just like the name states, this event will feature artists and vendors that come from both near and far.

"The future for Erie EDM is looking very good!" expresses VOTO. "I have been in contact with multiple promotional groups to bring Erie bigger and better events. I believe you will all notice from show to show how the production will be getting better with each show to come."

Unlike VOTO's last show, "Hard City," this event will offer talent and products from both Erie locals and out-of-towners from Columbus and Cleveland. VOTO's plan is to connect Erie with the larger EDM scene that surrounds our city in order to give some more exposure to the genre.

VOTO & Hekate (Krystan Pencil), Bando, DUBTAP, and Buffalo Road Vending comprise the out of town acts, all of whom have performed or vended at bigger venues and festivals. As for the locals, you can expect to hear music performed by CEE Brown, Brandi "FRESCO" Carlini, DJC DUBZ, and Fader Zim. Local vendors will include Bash Glass, Dom Greco Glass, Hippie Trap Movement, and Kaitlyn Page. A live painting will be constructed by AbstractClairvoyance (Lexii Robarts), visuals and lighting will be provided by Colossal Lighting & Skuda Productions, and live photography will be captured throughout the evening by Drone2You.

Besides the creation of these high-quality EDM shows for the Erie community, VOTO and his girlfriend Hekate have been busy traveling and performing as B2B at GLIT Nightclub in Orlando, Fla. and are scheduled to play at festivals such as Twisted Turtle Festival in Yorkville, Ill.; FLOhio Fest in Crooksville, Ohio; and Fader Fest In Springﬁeld, Pa. He helped start up the Erie EDM clothing line — which can be purchased online — in hopes of helping the scene grow. Finally, he has been creating a lot of new music, soon to release a six song EP titled The Collection, which is comprised of his best work yet and can be heard in its entirety at the event.

VOTO leaves his fans and followers with this parting comment: "This will be my best year yet and I am thanking you all for it ahead of time!"  — Symone Crockett