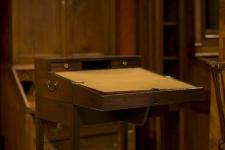 Move over, Hershey; Erie's staking a claim as Chocolatetown, USA.

Any self-respecting Erieite has at least sampled each of the three chocolatiers this city luckily boasts. And some can likely even identify them by taste alone.

Just in time for the second-most-celebrated holiday in the world -- falling short to New Year's Eve, in case you were wondering -- we bring to you our Chocolate Cover: A story featuring Pulakos 926 Chocolates, Romolo Chocolates, and Stefanelli's Candies. Rebecca Styn met with the proprietors of each establishment to uncover the rich history surrounding each savory store. So sit back -- perhaps after visiting your favorite chocolatier -- and enjoy our sweetest story to date.

And while many people often celebrate Valentine's Day with cards, chocolates, and flowers, some folks in the Gem City are using the holiday to help others. In this issue's To-do List, bearded-bard Alex Bieler interviews Jason "Iggy" Imig about an upcoming show he's helped organization at the crooked i: Have A Heart Benefit, featuring an all-star hip-hop lineup including Beedie, The Lower Eastside Connection, Ghost the ill figure, and more. All proceeds from the cover go to support American Childhood Cancer Organization. So whether you have a significant other or special plans for the night, plan to stop downtown to support a good cause near and dear to all of our hearts.

In this issue, you'll also notice something different, something else near and dear to us. While we try to cover as many topics as possible within these pages, we distinctively impress our thumbprint on certain issues, giving them the Erie Reader treatment for you, dear Reader readers. From the primaries all the way to Pennsylvania's inauguration, we've been following two local seats closely: State House District 3 and State Senate District 49, the winners of which were Ryan Bizzarro and Sean Wiley, respectively, who were both the subjects of our last cover story: Youth Movement. Starting in this issue, we'll be keeping tabs on our representatives, as they check in with "Harrisburg Happenings," a platform we've afforded them to keep clear lines of communication with their constituents -- that is you, us.

But our work extends beyond coverage of signature issues that affect our community. Being involved in the community has been an important endeavor from the start. So from a regular presence at events, like FILM at the Erie Art Museum, to hosting debates, we take pride in participating in and being part of events in the city. That's why you'll find us hosting a pre-party to the Savion Glover performance at the Mary D'Angelo Performing Arts Center at Mercyhurst University. While the event kicks off at 8 p.m., we welcome patrons to come a little earlier -- 6:30 p.m. to be specific -- to enjoy craft brews from Lavery Brewing Company. To prep for our pre-party and the show, be sure to read Bieler's Q&A with the Tony-Award-winning toes behind "Happy Feet."

So from sweet treats to local politics to events in the city, we're continuing to bring you the issues that matter. And from news (Upfront is full of Sheetz this issue, Jay Stevens takes to his Soapbox to voice his thoughts on gun control, and Rebecca Styn focuses on Gov. Corbett's plan to privatize liquor stores and the speculation swirling around the Millcreek School District) to culture (a Chuck Joy interview with local poet Geoff Peterson and a review of his most recent book of poetry) and entertainment (a Q&A with Mike Hall from STOMP), we're proud to say that we have you covered, Erie. Enjoy.