CZB's Charles Buki seems to believe in Erie. Now it's up to us to do the same. 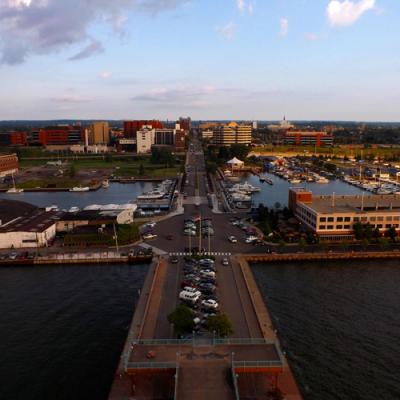 Recently, the City of Erie received the comprehensive plan created by urban planning firm CZB. The plan arrived with a letter from principal consultant Charles Buki, which we have included unabridged in this issue.

Erie's comprehensive plan arrived with a letter from principal consultant Charles Buki, which we have included unabridged in this issue. We chose to run the letter in full to share its impassioned call to action with all leaders and citizens of Erie. We were deeply moved by what is obviously a genuine hope that Erie will find the will and courage to move forward, and we wanted you to see this language firsthand.

Though the full plan is now publicly accessible, and though Pat Howard included passages of this letter in his Erie Times-News column on Sunday, April 10, we chose to run it in full to share its impassioned call to action with all leaders and citizens of Erie. We were deeply moved by what is obviously a genuine hope that Erie will find the will and courage to move forward, and we wanted you to see this language firsthand.

As Buki writes, "The time has long passed when Erie had the luxury of assuming future prosperity, and of not having to make hard choices. The only reality now is that future prosperity might come from making choices few will enjoy making."

Encouragingly, though, he adds that "Fortunately, the Erie community is full of energized, smart, hard-working, committed civic voices who both want to make a difference and are prepared, now, to start breaking with the status quo. We detected a significant appetite in the community to be leveled with, and for partnership. But those voices need to be mobilized. That means hearing them, and then being candid with them about the set of choices available, and about the real challenges and the real opportunities and the real work of tackling the former by investing in the latter."

In short: Engaging and celebrating Erie's change agents is critical. Disengagement, on the other hand, could be fatal.

In her book Daring Greatly: How the Courage to be Vulnerable Transforms the Way We Live, Love, Parent, and Lead, Brené Brown writes, "Disengagement is the issue underlying the majority of problems I see in families, schools, communities, and organizations and it takes many forms … We disengage to protect ourselves from vulnerability, shame, and feeling lost and without purpose. We also disengage when we feel like the people who are leading us – our boss, our teachers, our principal, our clergy, our parents, our politicians – aren't living up to their end of the social contract."

Brown, whose 2010 Houston TEDx talk on The Power of Vulnerability is one of the top five most viewed TED talks globally, has been hired by enormously successful firms to ignite leaders into the sort of risk-taking, inspired dynamism that can propel their organizations boldly.

Her clients – like Google, Facebook, and the U.S. Army, to name a few – count on Brown's groundbreaking acknowledgement of vulnerability as the genesis of rich creation and powerful transformation; and denial of it as one of the most destructive, stagnating forces of our time.

And Brown's language has a lot in common with Buki's.

As Buki's research elucidates, Erie is at an indisputably vulnerable point. But the safety of the status quo is at best an illusion and at worst a ticking bomb.

"There is no doubt some in the community will want an easier, softer way," Buki acknowledges. "With all the earnestness at our command, we beg of you to be fearless in the face of resistance to change and be thorough from the very start. By holding onto old ideas the result for Erie will be nil. Half measures will avail Erie nothing because your city is at a turning point."

Buki's team identified "Risk Aversion" as one of the primary stultifying forces in Erie. "Limited trust and overall risk aversion culminates in Erie putting off, or failing to acknowledge, difficult choices," Buki writes. "The community isn't prepared to make hard choices unless pushed to do so and no one in the community – in any sector – has yet shown a willingness to do the necessary pushing."

As Brown explains, "Rehumanizing … requires courageous leadership. Honest conversations about vulnerability and shame are disruptive. The reason that we're not having these conversations in our organizations is that they shine light in the dark corners. Once there is language, awareness, and understanding, turning back is almost impossible and carries with it severe consequences. We all want to Dare Greatly. If you give us a glimpse into that possibility, we'll hold on to it as our vision. It can't be taken away."

Buki and his team have given Erie that glimpse. Now it's up to us – and not just elected and appointed officials, but all of us – to hold on to that vision.

To admit we have a problem, yes. But more courageously, to bypass the blame game and admit that it's up to all of us to solve it.

Brown finds that "The big challenge for leaders is getting our heads and hearts around the fact that we need to cultivate the courage to be uncomfortable and to teach the people around us how to accept discomfort as a part of growth."

There's no denying that Erie is in an uncomfortably vulnerable place. And we've already seen some predictably cynical reactions to this plan, in line with the sort of exhausted disengagement Brown identifies. Some would rather move away. Some would rather blame leaders (whom they elected by voting or abstaining) and argue that nothing can be done because of dead weight in office. And some would rather belittle Erie and continue the tired old conversation that this town is hopeless, helpless, and irredeemable.

Are we ready, finally, to let go of that boring, inaccurate storyline? Are we ready to co-author a new one?

"The choice of which road to take is now squarely in your hands," Buki declares, "as will be the responsibility years from now, for which path was chosen."

We have what we need. At this point, the biggest "Mistake on the Lake" we could make would be to give up.