From the Editors: Decisions made and plans forged

Sometimes things have a way of working out, even when they don't go precisely as planned.  We think Erie will be in good hands. 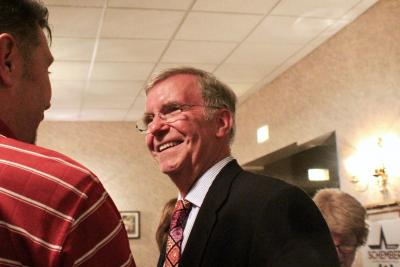 Decisions made and plans forged

Erie's mayoral primary consumed our thoughts for months. Worries and fears that the wrong person would be elected to lead our city gave rise to a growing sense of urgency. What would our future hold?

When the dust settled on Tuesday night, May 16, two victors emerged. By a healthy margin, Erie selected Joe Schember as their Democratic candidate for mayor. On the Republican side, John Persinger won with almost two-thirds of the vote.

We think Erie will be in good hands.

In our last issue, we endorsed candidate Jay Breneman. It was a difficult decision, but one that we stand by. Although Breneman finished in third place, it proved to be a strong showing in a crowded field of worthy contenders.

Sometimes things have a way of working out, even when they don't go precisely as planned.

Throughout the campaign, we were exceptionally impressed by Joe Schember. It was a pleasure to have lengthy discussions with all (save for one) of the mayoral candidates, and get to know them beyond their platforms and talking points. Schember struck us as honest, invested, and thoughtful. He was ready to give multiple examples and cite specific plans he has to bring our city to the next level. He's an engaging person to talk to one-on-one; a statesman who will represent us faithfully in the public eye, as well as in the office at City Hall.

In the coming months leading up to November's election, we look forward to a spirited discussion between the two candidates. John Persinger is a strong candidate in his own right, despite the odds being stacked against him due to the city's heavy Democratic leanings.

In this issue, Ben Speggen concludes his primary coverage with some insightful analysis and commentary about the results of last Tuesday's vote. As we look to broaden our coverage regarding other upcoming races, we look forward to more from Ben.

Former Erie mayor Rick Fillipi returns with his own thoughts on the results. In his latest edition of "Exile on State Street," Fillipi laments the poor voter turnout in the city and warns the next mayor to be aware of the difficult job ahead. Each leader is faced with challenging choices, and must make them with the city's best interest in mind.

Not everything has to have such high stakes.

Some decisions that are a little more fun to make, like which summer festivals to attend. Nick Warren looks at more than 20 different options within driving distance where you can let loose for a weekend and check out some decent music.