On being upright citizens 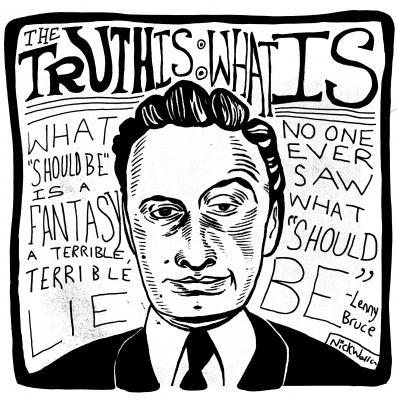 In comedy, you're always trying to arrive at a destination. You could call it a payoff, but most people know it as a punchline. Getting there can be half the fun, though. In the world of long-form improv comedy, most people are quick to cite "yes, and" as the biggest tenant on the block. While there's a certain ironic glee in disagreeing with that statement right away, it's not necessarily true. While important and certainly memorable, "yes and'ing" is mostly used just to build the base reality after the initiation (the first line of the scene). Agreeing and adding sets the scene. You listen and react to your partner's off-the-cuff offering. After you know your characters and setting, you start to learn the rules of this new world that you're creating off the top of your head. Maybe the first line lets you know that you're on a boat. Is is a yacht, a pontoon boat, or a 19th century brig? Are you on the high seas, or about to dock by Dobbins Landing? Are you the captain now, or a laid back retiree basking in the summer sun? After a few sentences, you and your scene partners will figure it out. As quickly as possible, you learn how to adapt, to live and thrive in this brand new environment. Then, something weird happens. This "first unusual thing" shakes things up and turns the world of "yes, and" to "if, then." If this is how it is, then what? It's the whole premise of the scene, it's the joke, it's what makes the scene fun to watch in the first place. Even if it has no crystal clear endpoint, that itself is the destination. It's being present in the moment, and working at the top of your intelligence. To make it all work, you first have to listen. Understand what's going on and how this world works, so you can chart a course for where you want to end up. Navigating a scene can be treacherous waters, but if you listen, it can teach you something about how to get through life. You might see something new and unusual: a multimillion dollar facility devoted to comedy (like the one in Jamestown that Ryan Smith and Nick Warren detail), a new use for an iconic flagship (as Jonathan Burdick discusses about the U.S. Brig Niagara's summer camp), a bayfront redevelopment that could disrupt local businesses along the bay (where Liz Allen will give you the full scoop), or a mysterious room you need to get out of (that Matt Swanseger clues you in on). All of these are new premises, some are fun, and some have high stakes, but they can all be navigated if you know how to start.

For a fully fleshed-out explanation of long-form comedic improv, and clear definitions for many of these terms, check out The Upright Citizens Brigade Comedy Improvisation Manual.

From the Editors: On Independence and Interdependence

From the Editors: A Summery Summary

by The Editors6/2/2021, 10:00 AM
Erie is often characterized by its winters. If you live here, though, you know it's our summers that truly define us.

From the Editors: A triage of the soul