Election season can be a scary time. 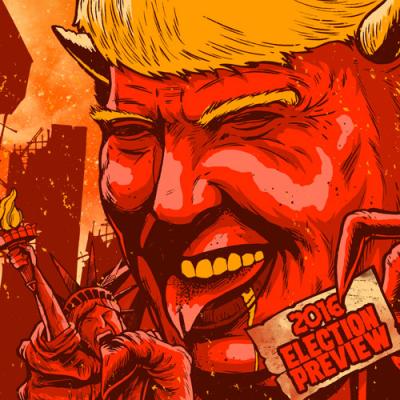 As fall settles in, we Erieites find ourselves waiting as long as we possibly can to mournfully say goodbye to our summer months. Easing into the cold weather routine, we dig out our sweaters and fill up our mugs with the appropriate warm liquids.

It's also Halloween time, consuming the majority of October. We're haunted by the usual ghouls, ghosts, and other things that proverbially go bump in the night. Traditionally frightening, yet ultimately benign, the stuff of horror movies serve as a backdrop to the month.

For years, the "Eerie" area has heard reports of frightening fauna, and if you can't get enough of those spooky creatures, Matt Swanseger has a few stories you'll love. Cryptozoology is the science (or more accurately, psuedoscience) of those unexplained critters that capture our imagination. Making a case for the "cryptids," Swanseger takes us exhibit by exhibit through our region's mythical menagerie, looking into the oral history of the mysterious claims.

'Tis the season for all things unnerving, right? That's truer more and more every day if you're following this election cycle. Lately things have become scary, and the political climate in this country has grown, for lack of a better word, monstrous.

'Tis the season for all things unnerving, right? That's truer more and more every day if you're following this election cycle. Lately things have become scary, and the political climate in this country has grown, for lack of a better word, monstrous. Local artist "Monster" Mark Kosobucki has illustrated that idea perfectly, and we hope you appreciate the satirical nature of this issue's cover, despite the ugly truth of some recent events. America is used to mudslinging; that's nothing new. What we're seeing this election feels more like an abandonment of basic decency.

Those of us at the Reader are immensely proud to represent a forward-thinking mindset in our community. We want change for the better. We want equality for all. We want economic growth. We want our leaders to be the best people for the job. While some of you out there might still be on the fence regarding Hillary Clinton, it's clear to us whom we cannot support for office.

A few days before the second, almost unwatchable debate, a recording leaked of Donald Trump speaking into a hot mic before an Access Hollywood segment in 2005. In the recording (readily available online) Trump lewdly suggests sexually assaulting women. It was the most talked about subject of the weekend, and it was disgusting. This is just one example of the extreme, dangerous nature of the candidate. Built upon a cavalcade of anger and fear, the discourse has bred xenophobia and racism.

Once again, Pennsylvania is an important swing state. Erie has traditionally leaned Democratic, but still plays a pivotal role in balancing out the state's urban and rural electorates. Our elected leaders play an essential part in determining how policies shape our region. In this issue, Nick Warren takes a look at Erie County's entire ballot, providing a few key facts to go along with the dozens of often unfamiliar names you'll see on Election Day.

Maybe it's no coincidence that election season comes to a head over Halloween. Sometimes, politics can be a scary thing.