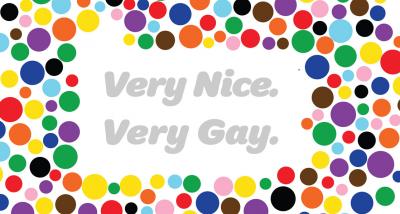 It's Pride Month. That means a lot. It also means rainbows. Hell yes. In some conservative circles, it might cause some eye-rolling or even worse. Let's stay out of those circles for now. Amidst some leftist echo chambers, June's rainbowification might elicit eye rolls of a different kind – calling out the corporate co–opting of a deeply personal movement. That's valid, and it's complicated.

But it's also progress.

The omnipresence of the Pride Flag in June, and the normalization of LGBTQIA+ (as will be our chosen acronym of 2022) issues is a remarkable thing. While it's decisively villainous for money-grubbing corporations to profit off of an underrepresented group of people, look to the rainbow itself, for the issue is not as black and white as that.

While it's certainly an intersectional issue concerned with classism, gender, and sexuality, think of all the queer youth who have had jobs – or simply been customers – at some of these places throughout the '90s and the 2000s. To make their lives just a little more welcoming makes a difference, even if it's a very small one. That being said, a Pride Flag does not wave a magic wand forgiving a litany of misdeeds done to an oppressed group in the name of capitalism.

If corporations make sure they are accountable and treat their LGBTQIA+ employees and customers with the equal rights that all humans deserve, and are actively making strides to do better, I say wave that Pride Flag high.

There's even been progress in the Pride Flag itself. In 1978, Gilbert Baker designed the original rainbow flag at the request of Harvey Milk, to be flown at San Francisco's Pride parade that year. Baker's original version had eight stripes, including hot pink, turquoise, and indigo. Due to fabric costs and availability, by the time the 80s rolled around, the flag had its iconic six stripes – which remains its most recognizable iteration.

That symbol remained for decades, until the spectrum needed to be widened. One popular variation gaining ground now is the Progress Pride Flag, designed by Daniel Quasar. They added a chevron of colors to specifically represent trans individuals, and communities of color. Similarly, Julia Feliz' New Pride Flag shared the same color scheme that adorns our cover, with a bisected hypotenuse. Valentino Vecchietti recently modified Quasar's design to include Intersex representation as well, and we're sure this will not be the end of the Pride Flag's evolution.

Looking inward, we want the Reader to be an inclusive place. We need to hear more BIPOC voices, more New American voices, and more LGBTQIA+, voices. Everybody's journey is different, and representation is important.

In this issue we talk about advocacy. Jonathan Burdick traces some of the local history of the LGBTQIA+ community, while Dan Schank takes a look at the present and future of Erie's inclusivity. Erin Phillips talks to Chris Kinder about historic preservation,  Liz Allen talks to a few Master Gardeners, blooming in their 70s, while Amy VanScoter details Sundae Vegan Sweets. There's much more too, like a summer music series checklist, and a piece from Jim Wertz on the Que Abides, as well as our usual bevvy of reviews and event spotlights.

We wish you all a very nice, and very gay month