Lately, Erie's getting a lot of attention. 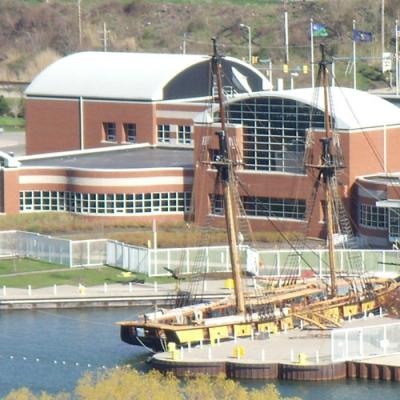 In our last issue, we highlighted a few passages from James Fallows, a national correspondent for The Atlantic, who spent a week here in late August with his wife, contributing writer Deborah Fallows.

The two continue to publish heartfelt – and highly-recommended – dispatches on The Atlantic's website, including one by Deborah on Sept. 5 about our phenomenal Blasco Library. She concludes, "The library has already changed the Erie waterfront for the better. Now, with adaptations to the new era of Erie and its people in mind, there is every reason to think the library can continue to help Erie residents change their lives for the better, too."

(Also a breath of fresh air: James Fallows' take on the Erie County Gaming Revenue Authority (ECGRA). Read it! After this issue of the Reader, of course.)

Still, other recognition hasn't been quite so hopeful. At least not on its surface.

In a segment on the Sunday, Sept. 11 edition of NPR's All Things Considered, Kevin McCorry explores the possibility of Erie's four public high schools shutting down, which would necessitate busing Erie students to surrounding districts.

This isn't new news to Erieites. But McCorry's outsider perspective, combined with the inclusion of several local voices, makes for a freshly moving piece.

McCorry talks to a few inspiring Strong Vincent students, whose viewpoints prove Erie Schools Superintendent Jay Badams' contention that kids living in the inner city or in poverty do, in fact, know what they're missing.

Strong Vincent junior Nathan Stevens, who's white, tells McCorry, "We're a city school and the surrounding districts are higher income and they always think that they're better than us … That's just how it works around here."

Sophomore Whitney Henderson, who is black, adds that "Everybody thinks it's a ghetto school, or that the people that go here are dumb, or bad."

But in the report, Henderson expresses concern about being bused elsewhere. "If I went to Harbor Creek, or if I went to McDowell, I'd feel like an outcast because of my skin color, because I'm black."

McCorry asks, "Would Erie's crisis even be happening if it was a majority white district?"

Dominique Booker, another SVHS student, responds, "I don't think so, but then I just question … It's a really hard question because you look ... and they have more money, more stuff, but I don't want to think that way."

Nobody wants to believe that shutting down our high schools so students can "have some sort of equity," as Badams puts it, "may end up being the most ethical and moral decision."

Nobody wants to think that way, of course. Nobody wants to believe that shutting down our high schools so students can "have some sort of equity," as Badams puts it, "may end up being the most ethical and moral decision."

Quick explains, "If the outcomes and the benefits that a school can provide to the son of a janitor are tied to those of the son of a congressman, then they are more likely to get those resources."

McCorry highlights Century's findings that "integration, when planned and done well, has historically led to major boons for low-income and minority students," and that no evidence suggests negative effects on suburban students.

Except that we're also getting attention for having a superintendent willing to risk just about everything – including, undoubtedly, sleep – to ensure that our students are given a fair chance at education.

And for students willing to have honest conversations about divides many adults would rather ignore.

Regardless of which schools they attend, it seems they have plenty to teach us.