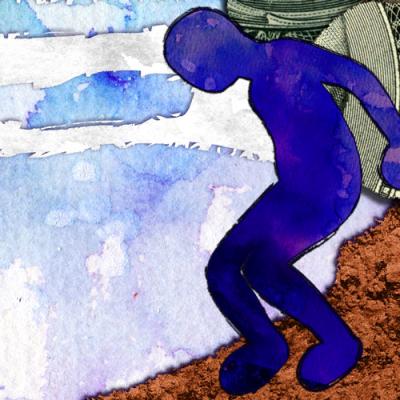 "I live on the lower west side of Erie, and I like my neighborhood a lot."

That's how Dan Schank begins his feature on concentrated poverty in this issue. Schank's opening immediately undermines the generalization that young professionals don't want to live here. The reality, as usual, is far more nuanced than the supposition.

As Schank explains, "the problem isn't that I wouldn't be happy in Frontier or Fairview. The problem is that I'm already happy where I am. But my local property options make little fiscal sense. And if I had children, I would be facing a genuinely moral dilemma rather than an annoying economic obstacle."

It's difficult to imagine how many Erie families currently face this "moral dilemma." Our city is full of potentially gorgeous, architecturally interesting, well-built homes with abundant character and expansive possibilities. And today, more and more young people are embracing a DIY attitude.

Meanwhile, as Ella Julian writes in her feature about the new Voodoo Brewery location in Erie's historic Boston Store building, "Critics of the region lament the brain drain effect – when 18- to 25-year-olds leave their hometowns after high school or college. However, in many regions, 30- to 49-year-olds and their young children are moving back, contributing to a phenomenon known as brain gain."

Julian is referring to Voodoo CEO Matt Rachocki, who moved back from New York City to raise his family and invest in the area. Surely, he's not alone.

What a time this could be for Erie real estate. Unfortunately, many of those who might be thrilled to get their hands on one of Erie's incredibly affordable fixer-uppers are instead inclined to purchase homes elsewhere.

What a time this could be for Erie real estate. Trendsetting homebuyers celebrate all things vintage, antique, and original. Character is commanding top dollar.

Unfortunately, many of those who might be thrilled to get their hands on one of Erie's incredibly affordable fixer-uppers are instead inclined to purchase homes elsewhere.

This circumstance, as we all know, has a paralyzing ripple effect.

"When the health of our schools relies on the value of our properties, we incentivize flight and punish those who stay put," Schank writes. "When trust breaks down between our police and our most vulnerable neighborhoods, crime flourishes and abuses occur. When fear of that crime escalates, foot traffic disappears, businesses fail, and basic needs can't be met."

Encouragingly, however, he also highlights the ways numerous community members and organizations have stepped in to ameliorate those issues.

This same generosity is acknowledged by Ti Sumner, in her piece about the Erie firefighters of Engine 8, with whom she spent an August day and night.

"The crew sleeps in one large room on the second floor," Sumner writes. "It's comfortable, with window air conditioners and cable TV. But these days, the city pays for few things. Every bed, TV, chair, and kitchen utensil is donated from the community or paid for out of the station house fund, to which each crew member contributes."

The fact that our already-tapped community is being relied upon to support essential services is troubling. But the fact that the community can be relied upon is promising. And the more we cultivate Erie's magnanimity, the more people will want to live here.