(or, how running a paper can feel like directing the worst movie ever made) 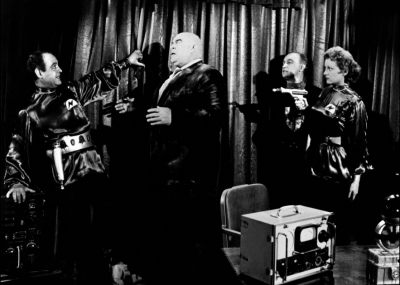 ED WOOD PROD. / VALIANT PICTURES
For all its flaws, and there were enough to garner the dubious distinction of Worst Movie Ever Made, Plan 9 from Outer Space (seen here with Dudley Manlove, Tor Johnson, Bunny Breckinridge, and Joanna Lee) won the hearts of audiences regardless, most famously Director Tim Burton and Erie Reader Managing Editor Nick Warren.

Allow me to drop the veil of "the Editors" for the moment.

This is being written by Nick Warren, managing editor of the Erie Reader, and it's the last time I'll be able to say that.

So? You ask, why are there B-movie creatures on the cover? I'll get to that soon.

In the meantime, I've accepted another position. It's still right here in town; I'm just shifting ever so slightly, trading editing for marketing. While I'm looking ahead with eager eyes toward what the future holds, now seems to be the proper time to get a little sentimental about the past, and I love to get sentimental.

The past six years in which I've served as managing editor have been nothing short of incredible. For the better part of a decade, I have lived and breathed this job. It's been so much more than a paycheck for me — being able to boost up local musicians, artists, and businesses has been something I wouldn't trade for anything.

I hope I've made a difference for the better. I tried, honestly I did.

Perhaps you've noticed, but this is our de facto Halloween issue, being in October and all. For more than a decade, "Monster" Mark Kosobucki has been providing the art for our Halloween issue, and this year is no exception. A friend of mine since college, Mark is one of the most talented illustrators I've had the pleasure to work with. He also gets Halloween like no one else.

As a concept, I suggested taking a cue from the worst movie ever made, Plan 9 From Outer Space (And before you correct me, yes, I know that the cover actually portrays characters from Robot Monster and King of the Rocketmen, but just bear with me).

For all its flaws, I love Plan 9 deeply (as does Kosobucki, not to mention fellow contributors Brad Pattullo and Forest Taylor).

More so, however, I love the movie it inspired, Tim Burton's 1994 classic Ed Wood. It is without a doubt, my favorite movie of all time.

The titular director, Edward D. Wood Jr., is played by Johnny Depp. His character exaggerates certain aspects of Wood's real personality, and it's so much more beautiful than the already captivating reality.

Aside from Don himself, Wood is the definition of quixotic. While Quixote fought against windmills, Ed Wood fought against any obstacle in his way to make his art and vision a reality. He makes stupid decisions, ones that are laughable and absurd. He makes compromises, cuts corners, and has a positive attitude the whole time.

"Mr. Wood, I only got one hour of sleep," a weary crewmember says. Wood replies "Yeah? Well, I got no sleep, and I feel great!"

But the thing about Ed Wood was that no matter what Hollywood threw at him, he got it done. He's forever in the history books because he wouldn't give up until he saw his film on the silver screen.

And it wasn't just about him. He made a family out of misfits. He gave Bela Legosi his last role before he passed away. He hired Maila Nurmi, better known as Vampira, even though she refused to speak. And wrestler Tor Johnson, even though he barely could. Wood was a transvestite himself, and welcomed people like Bunny Breckinridge, an openly gay man and drag queen in the 1950s into his family, giving him his only film role, as the ruler of a planet.

While people booed Wood's earlier works like Glen or Glenda and Bride of the Monster, Plan 9 found its audience. Welcomed by the hearts of fellow oddballs and weirdos decades later, it became one of the big "midnight movies," filled with lively comments, paving the way for both Mystery Science Theater 3000 and The Rocky Horror Picture Show.

At the end of Ed Wood, Depp watches as his film is screened for the first time, and says with conviction that "this is the one. This is the one I'll be remembered for.

So far, my time at the Reader has been perhaps my greatest joy. I'm also grateful to say that I've found my chosen family amongst the weirdos, artists, and musicians of Erie.

I've been here a while. As I step down, I'm the longest-serving managing editor. I've written the most articles. I've designed the most covers. The Reader is going to be hard for me to leave.

I'll be happy to be contributing to the Reader for as long as they'll have me. In the meantime, the future is in good hands. Stay tuned to find out more.

Because as the great Criswell once said "we are all interested in the future, for that is where you and I are going to spend the rest of our lives."