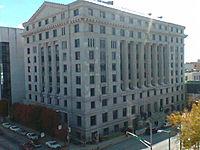 Fulton County, Ga.  - Criminals in Fulton County, Ga. breathed easier today, as renowned attorney Benjamin Leighton "Ben" Matlock died this morning. While Matlock hadn't argued inside a courtroom since May 7, 1995, his legacy as a crotchety man of justice was credited for keeping the county peaceful.

Reports from crime scenes describe those "hoping to get away with it" as surprisingly hopeful and optimistic now that the notorious grey-suit wearing, hot-dog loving lawyer wouldn't be there to reveal that the last person called to the stand at trials was essentially the perpetrator.

Matlock obtained his degree in law from Harvard University and established his legal practice in Atlanta, but chose to reside in a farmhouse in a nearby suburb. Much to the demise of crafty criminals at large, Matlock's unconventional crime-solving methods, like noticing clues other, more bubbling officers of the law had missed anywhere between 20 to 30 minutes into the case, helped establish his reputation as America's down-home, folksy yet smart-guy lawyer who revealed the true culprit in 50 minutes or less.

Currently, both law and order at Fulton County have been quiet about how they'll solve and deter crime in the future, but when questioned, officials responded that they're now interviewing applicants willing to begin in the whodunit style of law and transition to the howcatchem format as they age.