Geeked Out: Avengers: Age of Ultron 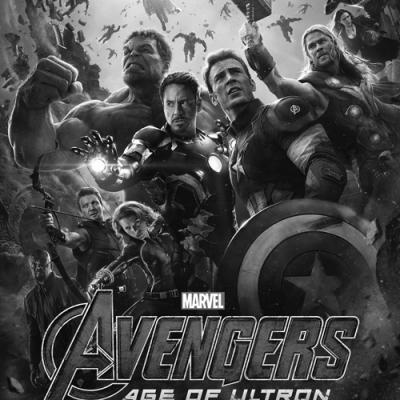 Avengers Assemble! Age of Ultron is in theaters now and fans of the Marvel Comic Universe (MCU) have been ravenously culling through it to see how it forwards both the Avengers and MCU plotlines.

As a fan of the previous film and of Joss Whedon's work in general, I finally got into the theater to see how the latest Avengers film shook out. My interest in the film was especially piqued when I heard some rumblings about Scarlett Johansson's Black Widow and how her story would be advanced.

So let's jam about superheroes.

First, I should note that I really liked Avengers. It was everything that I wanted from a comic book-turned blockbuster film – chiefly because comic book movies featuring yet another origin story for characters who have existed in pop culture for decades have been leaving me fatigued (I'm looking at you, Spidey and Wolverine). With Avengers, the main team is established, they have a mission, and more time is spent on the dynamics of these super humans than on where they each come from.

Whedon is also notorious for his ability to have groups of strong characters interact and to make those interactions meaningful and interesting; just ask any fan of Firefly why it was so great and witness a frothing mouth of excitement. Marry in that great character interaction with glorious fight scenes, featuring the Hulk tearing through the city in one of the greatest, and probably most fun to make, CG action sequences of all time and you've got a truly amazing – and worthwhile – comic film.

Age of Ultron starts off at a sprint and rarely slows down. The Avenger crew – with multiple independent films – has been at this awhile; here they're at work trying to relocate Loki's staff and snub out the remaining forces of Hydra. Snarky lines – great writing! – are exchanged between the characters as they assault a Hydra base, establishing that this is just another day in the life of the Avengers.

But a lot of a cool thing can be heavy and exhausting. A good friend of mine related his experience of the film to me like this: "The movie was like chocolate cake; I love it... but by the end, I ate a whole chocolate cake..." I know the feeling, both figuratively and literally. Ultron was exactly what I expected it to be (great!), but by the end, I didn't have the same satisfaction I did from the first one. I enjoyed the pace, the dialogue, and the action completely, but I wanted something… something unexpected – something more than rich, sweet chocolate cake.

I find it hard to blame Whedon, as he doesn't have much leeway to put major characters like Iron Man or Captain America on the chopping block. That being said, they do set Hawkeye up as this films martyr, but I won't spoil that for you (a Black Widow spoiler ahead, though).

My main complaints were that the camera work was shakier than before, which is a bummer after seeing films like John Wick that remind everyone that action shots doesn't mean the camera needs to be strapped to the back of a dog chasing his tail. I also found myself wanting more scenes like the brief respite in action we get as the team crawls to Hawkeye's 'secret hideout' in a Midwest ranch. Hawkeye reveals that he is just a plain guy, with a wife and kids; he is literally the antithesis of superheroes like Iron Man and Captain America and this calming commonness serves as a nice break from all of the building smashing. I wanted more of that human side of the characters – not just the balls to the wall, battle-brothers that is the entirety of the film.

Though what was most surprising to me, after seeing the film was the discussion of Black Widow's 'monster reveal.' Somewhat of a spoiler alert here (in case you haven't been on the Internet lately): There are debates and conversations happening right now about the lack of attention given to Natasha and to make her big reveal be that she is sterile, her weakness thus being her inability to have children. Some argue that this scene is anti-feminist and that the Black Widow is more window dressing for the male superheroes to play off of, as she cleans up after them, and flirts with all of them to push them towards doing the right thing.

However, I viewed this scene differently. From my point of view, Natasha and Bruce (touching scene, Hulk!) were commiserating not on the fact that they can't have children, but that they both have had the option of a different path revoked from them. Natasha was trained to be a killer, and in her 'graduation', she was sterilized, thus removing any other path to her life other than being the killer she was designed to be. Bruce similarly doesn't want to be the Hulk and wants to see peace, but given the situation, there is no other option. To me, it is extremely sensitive to the choice of both men and women and the insanity of living in societies that remove choice.

I don't think Natasha wants to be a 'baby factory' as some may have you think, but knowing that she can never have a child is something that weighs heavily on her, because it is not just some internal struggle, it is something that exists in the physical world as a constant reminder of what she was designed to do. In that respect, she identifies with Bruce as a scientifically created 'monster' – which it should be noted that there are constant references of the heroes being monsters or mad scientists in Ultron.

I agree that it is a shame we've gone this long without a single female super hero-focused movie, and there are legitimate concerns over the lack of representation of women, even as far as the lack of a Black Widow toy for Pete's sake. But I feel there is far more nuance to the Black Widow than many give credit. Hawkeye and the Black Widow are in my opinion the real stars of Avengers 2, and if anything I wanted more time spent on them than those other shield-slinging, iron suit-donning, hammer-wielding knuckleheads.