Geeked Out: Waking the Dream -- The Sci-Fi Reality of Oculus Rift 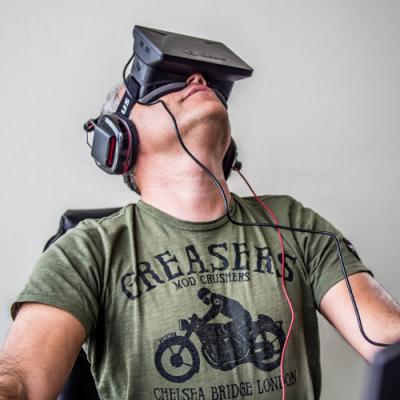 Virtual Reality has been filling science fiction rags for decades. We've all read the book, seen the movie, or heard the wild story of the virtual worlds we can explore by strapping some goggles to our domes.

BREAKING NEWS: It's no longer science fiction; this exists in our world today, and it's called the Oculus Rift.

Two years ago, Oculus Rift ran a successful Kickstarter campaign raising a whopping $2 million, and it promised to be the future of gaming. The goal was simple; the folks behind Oculus Rift wanted to see if consumers would help subsidize the production of a consumer-grade virtual reality helmet. As it turns out, there were roughly 9,500 people interested in throwing down their hard-earned cash on making that sci-fi dream a reality.

In those two years following, they released developer units for game designers and studios to begin to tinker with. It was a new hope and a dream come true. Finally, game makers could create games where we – the user – could fly as Superman over Metropolis, soar in the cockpit of a futuristic fighter jet, and could base-jump off of virtual, dizzying heights.

I cover the game development scene extensively and Oculus was this oddity that had everyone's attention. What would be the first big hit using VR? What are some things we can make that could have never been done before? Could this be marketable?

When news broke, Oculus was a fresh frontier for aspiring developers looking to craft truly immersive experiences. And with what little time it had been alive, many awesome prototypes and games were made to showcase the incredible potential of this new piece of hardware.

The reason why this seems very misty eyed is because something equally incredible happened recently. I'm sure most of you heard the news because it left everyone who has been following the Oculus story gobsmacked. Facebook purchased Oculus for $2 billion. Mark Zuckerberg looked at Oculus and said that non-market proven hardware was worth a wild amount of money.

And with this purchase the hopes and dreams of many developers was shot out into the vacuum of space.

It might not be all that bad. Perhaps this – many argued – is just what Oculus needed. With this supreme injection of cash, it could help to push the VR into a faster production cycle and also to help market it to the average consumer. Take it from the oddity of science fiction to something that every parent purchases for their little ones this holiday season.

But this argument is only held by the minority. The majority of experts and individuals I've spoken to now have even more trepidations than before. Oculus VR was originally marketed as video game hardware. With the acquisition by Facebook and Zuckerberg's own words, "Oculus is the future of social communication on the Internet," that is terrifying. Facebook, which has its own shrouded past, also has a very uncertain future as criticism continues to rise on its IPO and current privacy/advertising policies. The dream of virtual reality now looks a lot like visiting virtual shopping malls to be served up ads based on what you 'liked' that one time. Picture a world where you are playing a game and a pop-up for Farmville comes screaming up at you in virtual space.

I had the opportunity to use the Oculus, and I have to admit it is an incredible experience. I absolutely lost myself into the video projecting into my eyes as I felt myself tipping forward as I virtually fell down a cliff. Oculus tricks your mind in the most magical ways, and it does truly feel like it's a dream from the future. It just now seems like that future may end up being one of those dystopian nightmares.