Geekend Out: Summer Board Game Fun

When the heat is just too much or the rain forces us indoors, board games are always there keep us company. 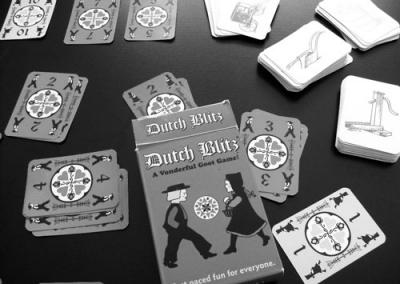 The sun is shining, the beach is calling, and we have been enjoying rather pleasant temperatures as of late – yep, it's summertime! However, when the heat is just too much or the rain forces us indoors, board games are always there keep us company. And while we all have our go-to favorites and classics from which we'll never part, I have two fantastic games to share with you – one is a blitz and the other fulfills the dream of being a mega monster wreaking mayhem in a major metropolitan area.

Dutch Blitz is "A Vonderful Goot Game!"  Perhaps you've heard of this particularly frantic card game since it was designed in our home state of Pennsylvania in Bucks County. So the tale of inception goes, German immigrant and optometrist, Werner Ernst George Muller, designed the game as a means to help his children easily learn about colors and numbers – and it's an incredible all-ages game you ought to give a try.

The Dutch Blitz allows for two to four players, and the easiest way to describe it is that it takes key aspects of other popular card games, like spoons, war, and solitaire. In wonderfully Pennsylvania Dutch style, the game has four player decks of cards that are distinguishable by the icons of water pump, plow, pail, and a carriage. Each player deck is constituted of ten red, blue, green, and yellow cards each having cards going from 1 to 10.

The setup is similar to solitaire in that you have piles that you need to clear, and you do that by creating new piles that go in order of least to greatest by color in the center. You draw cards similar in style to solitaire, three at a time as you fish for a card to play. Where it gets crazy is those piles in the middle are playable by all your opponents. This is where the Spoons and War analogy comes in. The game is fast and frantic, and often times you'll end up slapping hands racing to place your card.

Although the game's designed for players of all ages, when I play it, it becomes a heated contest full of cursing and laughter as we all race to clear out the "Blitz Pile." This is a perfect game to play since rounds are quick and anyone older than eight years of age can understand the concept. I was introduced to this game on a train ride, and I have been hooked ever since.

The other game I wanted to talk about has been my go-to party game when friends are over. Weeks ago I wrote about my love for all things Godzilla. King of Tokyo is a board game that allows my fantasy of being a massive mega monster like Godzilla, or even a hulking kaiju from Pacific Rim, come to life.

King of Tokyo was designed by creator Richard Garfield, who just so happened to make a well-known table-top game called Magic: The Gathering.  Unlike Magic, this game doesn't require countless booster packs of cards. King of Tokyo is a dice-rolling game with some interesting strategic elements that give you just enough to contemplate as you wait for your turn to come around. With easy to understand rules and a natural way to force quick play, this game is great for ages 8 and up.

For me, King of Tokyo is the best game to play with players who tend to take forever on their turns. You know who I am talking about – that friend or family member of yours when you are playing Risk/Scrabble/Sorry/whatever and takes thirty minutes to make the simplest move. I, for one, hate those people, and King of Tokyo solves that problem by being a dice game where you only have so many rolls before the chaotic nature of luck and chance decides what you can or cannot do. All the while you can pretend to be a Gigazaur fighting against a Mega Krakken!

Designed for two to six players, you roll dice and attack each other, heal your wounds, or charge up and collect energy cubes to unleash special attacks or mutate into a stronger monster. All the while you fight to be king of the hill – err, I mean King of Tokyo!

While it may seem silly, this game has depth and multiple ways to win which makes each play session exciting. King of Tokyo is also a great game because while it does have that strategic depth and a wonderful theme, the dice rolling helps keep it lighthearted and fun.  Also who hasn't dreamt of being a Godzilla-like monster trudging about a city knocking down all challengers!