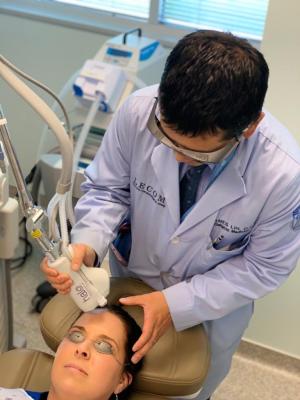 We all grapple with the changes that come as we age. And for many of us, those struggles lie in the physical body — not the mental. That disconnect is a cause of concern for many individuals. As such, we live in a world that is always looking to redefine the beauty business space, finding new and innovative ways to help us to "age gracefully."

One of those on the forefront of many of these initiatives locally is Dr. James Lin, a board-certified internal and geriatric medicine physician, fellowship-trained in aesthetic medicine. He is also vice president of Senior Services and Adult Living and director of the LECOM Institute for Successful Aging — and one of the Erie Reader's 40 Under 40 honorees in 2014.

Lin is the founder and director of the Glow Laser and Beauty Center, located on the LECOM Senior Living Center campus. And while Lin works with patients across the age spectrum, most of his base is from the Baby Boomer generation (those born between 1946 and 1964). "I see many patients where their mind is young, but their body is aging. These are things they get depressed about. They feel young mentally, but they don't see it physically. They are very active, but their physiology doesn't always keep up. We realized through technology we can keep their physical body in check with their emotional and mental well-being."

Growing up, Lin didn't necessarily want to be a physician. It was more the paternal path (the desire from his father to have a son in medicine) that led him there. In college, he majored in pre-med and economics because according to Lin, "early on I knew that any profession I would go into — the basis of any industry, job, or service — is all based upon economics. That was a very important foundation to build upon, no matter what field I had decided to go into — including medicine." After receiving his undergraduate at NYU, Lin came to Erie to pursue his medical degree at LECOM.

His father Henry Lin, though, had deep roots as an entrepreneur.

"My father started in the shoe business. He manufactured shoes and had clients he would source shoes for in Europe." And in the late '70s, he became the first to manufacture for Puma — a popular multinational company that designs and manufactures footwear. "Puma had 50 production lines that spanned across Southeast Asia — and my father was one of the largest suppliers for them." Between that and his sourcing company, his father could manufacture anything from a beach sandal to a military boot.

However, during Lin's medical internship, his father became ill and he flew back home to Taiwan to take care of him — spending six months at his father's bedside until he passed. Lin then had to make a decision. "My father didn't have a succession plan, and when I went home, there was no future plan for the [sourcing] business." His brother ran the manufacturing one. "My brother couldn't run both though, so I had to choose to close it or run it. I opted to run it."

Lin quickly learned the brutalities of running a business, and essentially had to start over.

"The loyalties that were there did not survive my father. I had to find new customers. I had to learn everything overnight — that life is just not studying to go to medical school where my father paid for everything. I had to be efficient." And that is where his entrepreneurial spirit kicked in. "I was able to learn the business quickly." After almost two years he then hired someone to manage it full-time. "I was able to then oversee if from a distance." And quite a distance it was.

Lin then came back to Erie to complete his residency. "When I was finishing my training I was asked to start the Geriatric Medicine program for LECOM. It was those two years I spent at home that helped me create this program. That and the ongoing support from the LECOM board of trustees giving me the freedom to develop the entire continuum of care." It's a program that has been expanding over the last 10 years and ultimately resulted in the LECOM Senior Living Center.

This newest project is the continuation of that entrepreneurial spirit. Lin wanted to find a way to bring the physiology of the body in check with mental well-being.

Glow Laser and Beauty Center is that solution. There are a number of services the center can offer to help one look younger, or "age gracefully."

"We are the only spa in the Erie region that oﬀers HALO™ Hybrid Fractional Laser treatments." Halo is a scientifically advanced treatment that eliminates years of skin damage — without the discomfort or downtime of traditional fractional laser treatment. It is one of the most advanced and trusted pieces of medical and aesthetic equipment in the nation.

In addition, rising in popularity are Platelet Rich Plasma (PRP) treatments. They are gaining steam in the beauty world and might be one of the best-kept secrets to younger-looking skin. "The procedure is a treatment option for those looking for a more natural approach to better skin." There has been over a decade of success using PRP in anti-aging therapy. Just Google "Kim Kardashian blood facial." (Or maybe, don't.)

It should go without saying that finding a reputable physician is key. Lin has over 10 years of experience, helping thousands of patients age successfully. This is just the next step on that mission.

Want to know more about the services provided? Lin highly recommends setting up a consultation. "We provide personalized care, and will help design a customized plan for anyone." You can also check out the full line of services at glowlaserbeauty.com

Rebecca Styn is VP of Ventures at Erie Innovation District and is the proprietor of Room 33 Speakeasy. She is also completing her Ph.D. in Leadership and Organizational Learning from Gannon University. Follow her on twitter at @rstyn.