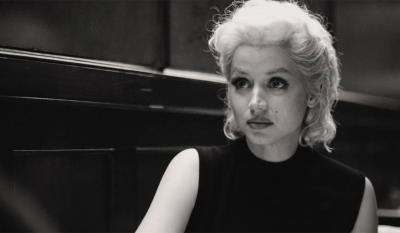 Andrew Dominick will forever earn my respect for taking one of the most mythologized figures in American history and telling a thoughtful, unique, and compelling story about him. That film, The Assassination of Jesse James by the Coward Robert Ford will be remembered as one of the great character studies of its time. Sadly, he couldn't do the same with another over-mythologized American icon, for Blonde tells us nothing about Marilyn Monroe beyond the tired cliche that behind the beauty and glamor there was actually a sad, lonely woman. Despite some impressive (though overwrought) filmmaking, this is the story we've heard a hundred times before.

Based on Joyce Carol Oates' controversial novel, the film concerns Norma Jean Mortenson (Ana de Armas) as she grows up surrounded by abuse and mental illness. As an adult, she re-invents herself as a movie star and sex symbol, but the character she creates — Marilyn Monroe — threatens to consume Norma Jean entirely.

The film is over-directed and needlessly flashy (at times bordering on camp), but these techniques do not hide the fact that we learn very little about Monroe the person through the intimidating runtime. We see the expected scenes of abuse, addiction, and lustful stares from lecherous men, but Marilyn herself remains little more than a tragic icon; a hollow figure just as substanceless as the perfectly recreated scenes that pepper the film. I wish filmmakers would either do something interesting with this tragic story or let the poor soul finally rest in peace. Blonde is now playing in select theaters and is currently available on Netflix.