Get Down to Sounds Around Town 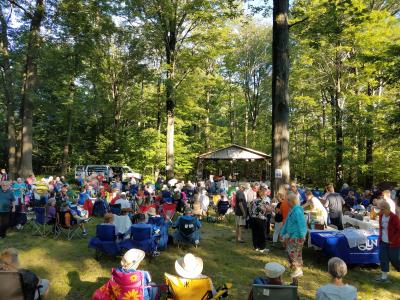 It's time to bring out all your family's favorite picnic items, because the kickoff to the WQLN's 2019 Sounds Around Town Summer Concert Series is right around the corner. The series, which includes performances from five local bands, will be hosted for the fourth time by Larry Wheaton (himself a member of This American Song and Tiny Paper Boats).

"What makes this concert series important is that we can hopefully expose artists, both up-and-coming as well as veteran acts, to a wider audience. I also feel that we are creating a time capsule of the artists that are making an impact on the Erie region," expresses Wheaton.

A time capsule is certainly the perfect description of the event as it was relaunched from a previous WQLN program in 2014. Throughout the series, there will be free samples of beer (Erie Beer Company), coffee (Mill Creek Coffee Company), and Smith's products. These sponsors plus the multitude of other local involvements are what make the event a possibility.

As an added bonus, the audience not only gets to experience a live concert, but also a live television/radio production. During each concert, WQLN sets up and records the production and airs it later on both radio (91.3 FM) and television.

Wheaton states, "The staff of WQLN is important. It's an event where it is all hands on deck, as the production department is working diligently on capturing the performance. We also have employees of other departments volunteering their time to make sure that our guests are happy, safe, and to answer any questions that may arise."

The Sounds Around Town Summer Concert Series lineup is as follows:

July 12: The Duke Sherman Band — A staple in the blues and rock community, this is a four-piece band that has been performing in the area for the last decade.

July 19: Cult Classics — A indie-pop band (featuring Erie Reader managing editor Nick Warren on guitar) that is popular in the local community, as they have been featured in multiple festivals and events with their unique melodic tones.

August 2: Fred Oakman & The Flood — A Meadville modern country/folk band that switches up the pace by adding rock-influenced tones into their music.

August 9: TK Blues Company — A entertaining band that stands out with their "not quite original, not quite copycat" blue-infused setlists. — Symoné Crockett