Get Funky (and Warm!) With Cory Henry & the Funk Apostles 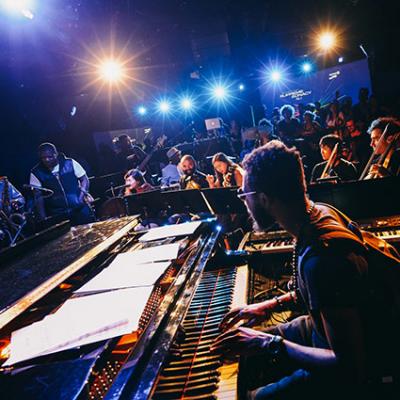 Some genres of music warm even the rawest of winter days. And while it hasn't been as snowy 'round these parts as it typically is, that doesn't mean local music fans should skip the rousing, funky, thoroughly warming night of music on Feb. 23 when Cory Henry & the Funk Apostles take over Walker Recital Hall at Mercyhurst University.

Henry is also a member of the Grammy Award-winning group Snarky Puppy, which plays R&B and jazz – sounds that speak to Henry's current iteration.

Henry has quite the celebrated background, having performed with artists like Kenny Garrett, Robert Glasper, and Bruce Springsteen. He is also a member of the Grammy Award-winning group Snarky Puppy, which plays R&B and jazz – sounds that speak to Henry's current iteration. Most recently, the outfit played with the BBC Proms in England, and on The Tonight Show with Jimmy Fallon.

As for the music itself, get a taste by checking out Henry's cover of "Billie Jean" with the Proms; the synthy, swarthy, and sultry sounds sway over the toe-tapping percussion and strong beat. Henry also gets bonus points for the otherworldly way he manipulates his voice. "What's Going On" picks up the pace with a faster beat – and some absolutely mesmerising percussion – but dreamy, swoony keys over a stellar, funky bassline warm those chilly limbs in a way that layers and a fireplace cannot. The group's cover of Gnarles Barkley's "Crazy" mellows out the tune in a smooth jazz fashion, but with a cheeky bassline that stands up to the lyrics – with guest vocals from Chantae Cann. For more sonic surprises and some genuinely brilliant music, head to Mercyhurst for this Erie Reader co-sponsored gig. – Miriam Lamey