Getting Warmer With the Scoville Food Institute

Life's too short. Stop and smell (and taste and feel) the chilies. 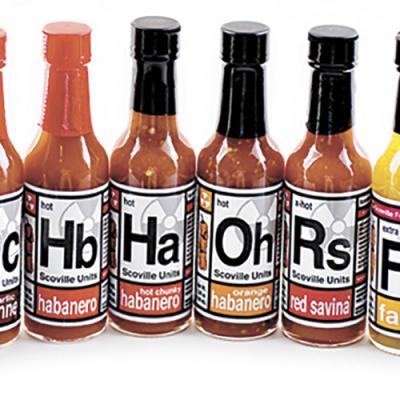 The world's hottest pepper, the Carolina Reaper, is so potent that one ounce must be diluted in over 11,000 gallons of water to be rendered imperceptible (i.e., enough to fill the average aboveground pool). In a retail economy flooded by a small cadre of conglomerates, startups must be similarly concentrated in terms of their plan, vision, and resolve – or be washed away. Manufacturing costs, distribution costs, and slotting fees (which can be thought of as a property tax paid to retailers for shelf space) can dilute profit margins until they barely register - if they aren't nullified altogether.

"If you're planning on starting a small business, take however much money you think you need and double it," says Jon Whaley, sole proprietor of the Scoville Food Institute, who has faced his fair share of trials and tribulations since establishing the local hot sauce company in 2008.

It takes a special degree of intensity to survive long enough to see things through, and Whaley certainly does not lack for that. Interviewing Whaley is like watching a laboratory beaker froth and bubble from the interplay of the enclosed reactants – past regrets and present uncertainties compete violently against future hopes and aspirations. He wishes he had started at a younger age and with the backing of more investors. He wonders whether he can keep doing this without sacrificing more time with his wife and three children than he already has. Yet he is excited to test new ideas, debut new products, and eventually achieve national brand status, thus eliminating the need to ever work again.

"I don't know if I've ever been a good employee," Whaley admits.

Whaley was always drawn to the idea of being the Man, but he doesn't suffer any delusions of ever beating the Man. He just wants to generate enough heat with his hot sauces for the Man to take notice. He is inspired by the stories of Bear Naked Granola (snatched up by Kashi, a subsidiary of Kellogg's) and Honest Tea (subsumed into Coca-Cola): once-obscure brands that gained traction by not beating, but joining the big guys. In the condiment realm, the big guy is Pittsburgh-based H.J. Heinz Company, which merged with the even more gargantuan Kraft Foods earlier this year. Realistically, Whaley estimates that he needs to get his products into 500-1,000 stores before Heinz even sniffs them.

They should, though. Because he's onto something.

Life's Too Short. Stop And Smell (And Taste And Feel) The Chilies

Chili peppers have been a staple of the human diet for millennia, but nature never intended them that way. Their "hotness" actually evolved as a deterrent to mammals, whose molar teeth crush the seeds, whereas birds leave them intact for dispersal. The substance responsible for the burning sensation (that us furry folk feel but our feathered friends don't) is a chemical called capsaicin, named for the genus Capsicum (i.e., chilies), from which it was gradually isolated over the course of the 1800s. So next time you're curled in the fetal position, whimpering after eating a basket of ghost chilies in a vain attempt to prove your machismo and/or girl-power … remember that Toucan Sam wouldn't even break a sweat.

The Scoville Organoleptic Test arose in 1912 not as measure of our intestinal fortitude, but to gauge efficacy of capsaicin as a topical analgesic. Capsaicin is still utilized in this capacity to this day – it overloads sensory receptors to essentially block pain signals from the application site. However, in higher doses it can do more harm than good. Wilbur Scoville was a pharmacist working for the firm Parke-Davis trying to determine why some peppers stung a little and some stung a lot. His test involved dissolving dried chilies in alcohol to extract the capsaicin, then incrementally diluting it in sugar-water until a panel of taste testers could no longer detect it. Scoville Heat Units (SHU) are based on the degree of dilution, rated in multiples of 100.

Because taste is subjective and therefore inherently imprecise, more exact methods for measuring pungency have since been created, such as high-performance liquid chromatography (not that you're crude or underperforming, but this sophisticated telemetry equipment is a little more high-performance than you). If you don't have access to a top-grade research facility, though, don't fret - all you need is an unassuming uncle and a small serving spoon.

But he wanted to. That's because when capsaicin makes contact with the tongue, chemoreceptors distinct from the taste buds tell the brain, "This guy is a dumbass for putting this in his face." The brain concurs and releases endorphins, "feel-good" chemicals, to compensate for your indiscretion. This may explain why spicy foods have such a large and fervent following - an estimated one in five Americans use hot sauce regularly. We all know one of these people, for whom food is not really food, but merely a vehicle for hot sauce delivery (in the pharmacological sense).

If you are such a person, I strongly encourage you to try Scoville sauces. The lineup fluctuates with the availability of each variety's eponymous pepper, but all are versatile, flavor-forward, and 100% all-natural. The Reaper is the Big Bad Wolf of the bunch; as sweet and welcoming as a Southern gentlewoman at first (orange marmalade is the second ingredient by volume) before she turns and bares her fangs. For the somewhat squeamish, there is the more conventional Cayenne and Garlic Cayenne, which are on par with Frank's or Tabasco. If you are unsure of where you stand, Whaley has developed the Periodic Table of Scoville Units, which assigns a number and symbol to each pepper along with its "atomic weight" In Scovilles.

The chemistry motif is elemental to the Scoville brand's potential marketability. The label designs are clean, consistent, and easily identifiable on store shelves. Furthermore, these do not fall prey to the gimmickry of other specialty brands, who appeal to collectors with cutesy puns or sight gags.

Until the day comes when you're buying Scoville products at Wegmans or Giant Eagle, you can purchase them at Whole Foods Markets in the North Atlantic and North East regions, or in many beer stores, and via Whaley's website, www.scufoods.com.