Give a Gift, Get Some Ink 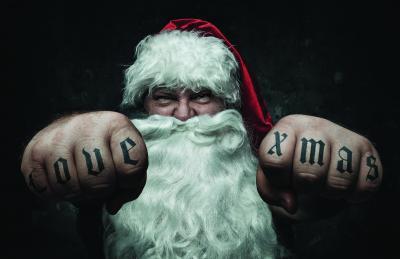 rangizzz
Love Christmas, charity, and the power of self-expression? Trade toys or pet food with a minimum value of $20 for some ink at the annual Wayward Tattoo Drive, benefiting the ARC of Erie and the ANNA Shelter.

There are two truths about Erieites this time of the year: They have a great capacity to give and a lot of skin left to ink.

Those looking to both give and receive can satisfy the former by donating toys and/or dog and cat food and the latter by getting some awesome new art right on their personal canvas. That's right, Erie: the folks at Wayward Tattoo are back at it with their annual tattoo drive to benefit the region's children and animals.

"This event's growth has blown us all away," says Wayward co-owner and co-founder Corey Thompson, one of the 11 artists who'll be inking at the tattoo studio's fifth annual holiday toy-and-tattoo drive.

"We continue this annual event, because our love for Erie grows yearly just as the event does. It's a long, hard-working day for the artists, but it's something we are proud to do," Thompson adds. "It's the best way we've been able to consistently give back to Erie."

Last year, Wayward doled out more than 220 tattoos and collected more than 180 toys for the ARC of Erie, as well as hundreds of pounds of pet food and supplies for the ANNA Shelter. They're looking to exceed last year's work and haul by adding another artist, taking this year's total participants from 10 to 11.

"It's a meaningful day for Johnny Matters (Wayward's other co-owner/co-founder) and myself," Thompson says of the event. "Our crew always comes in early, gets amped for the day, and works hard. It's a great way for all of our artists, from our two shops, to get to work together and have fun, as well as meet each other's clients, all while doing something positive for our city."

For the fifth year in a row, the nature of the event remains largely the same: Show up on Saturday with a toy valued at a minimum of $20 with receipt for proof of purchase — or $20 or more worth of pet food — and get a tattoo in exchange for the donation.

Tattoo designs will be done in advance by the participating artists. They won't be posted online; however, those eager to see the options can head to Wayward's 12th Street location a day early for a sneak peek.

To get a tattoo, you'll need to be at least 18 years old and will need to have your ID with you. The limit is one tattoo per person — unless said person wants to donate a second round and go through the line again.

Skin will be inked on a first-come, first-served basis by whichever artist is available when you hit the front of the queue. The event's end time is an "ish," because, according to the event's Facebook page "we always end up tattooing into the wee hours but there will most definitely be a cutoff time."

Recommendation: Show up early and be patient.

Another recommendation: Bring some cash to tip your artist. These talented folks aren't profiting from a long-day's work and are donating their time. And rumor has it, tipping your artist makes getting a tattoo hurt less. And you'll be feeling pretty good from donating already so it's a win-win-win for you, those in need, and these Wayward do-gooders. — Ben Speggen