Globetrotting Cinematographer Reflects on the Ethics of Her Craft in Cameraperson 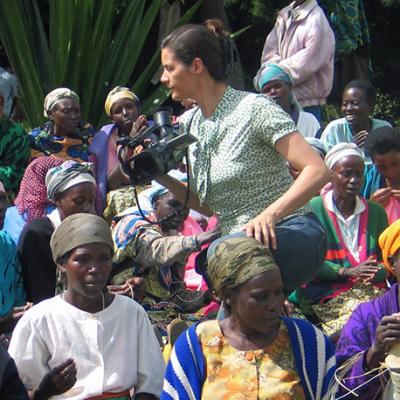 For the past 15 years, cinematographer Kirsten Johnson has been jet-setting across the globe to film some of the world's most vulnerable, inspiring, and troubling places.

In Iraq, she profiled the first female soldier ever sent into combat for the documentary feature Lioness. With Academy award-winning filmmaker Laura Poitras, she interviewed prisoners at Guantanamo Bay (2008's The Oath) and set up camp in a Hong Kong hotel room as Edward Snowden exposed big secrets about government surveillance (2014's Citizenfour). She has visited refugee camps in Sudan, profiled French philosopher Jacques Derrida, documented political campaigns in Liberia, and interviewed rape victims in the American military.

With 2016's Cameraperson, she shifts her focus inward. According to a statement released on the film's website, she hopes to "convey the immediacy of finding oneself in new territory with a camera as well as giving the audience a sense of how the accumulation of joys and dilemmas a cameraperson must juggle builds over time."

Documentaries are often associated with objectivity and neutrality – facts instead of fiction. Johnson's film complicates these assumptions.

Documentaries are often associated with objectivity and neutrality – facts instead of fiction. Johnson's film complicates these assumptions by focusing on the power imbalances that arise alongside her work. How can documentary filmmakers avoid jeopardizing the safety of their subjects? How can one establish trust in a war-torn area? Is it ethical to offer exposure to the subjugated, rather than material goods?