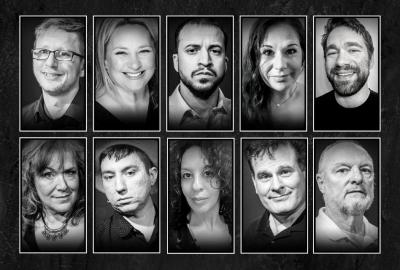 In an excerpt from the book 1606 by James Shapiro, published for the Guardian, the author theorizes that William Shakespeare's personal experiences of that titular plague year (a horrible breakout of bubonic plague killed his own landlady), and then the move to fully indoor theater come winter, influenced the content and tone of the playwright's work from that period on.

The creation of art — and creators' reaction to extreme external forces — has changed so little in 400-some years. The restrictions, the upending of the world (a world, in our case, completely unprepared for pandemic life, unlike the people of Shakespeare's time, for whom plague could be a yearly event) engender new ideas and new stories, innovations, and ingenuity.

For Pulitzer Prize-winning playwright John Patrick Shanley, the shutdown of theaters and the new limitations for the cautious openings months later during the COVID-19 pandemic was a similar call to action.

So he wrote Rogues' Gallery, a collection of 10 monologues of varying lengths, which allow for minimal interaction during rehearsal and were even presented as a series of Internet videos that have the look and feel of a Zoom chat.

Thanks to an increasingly bright public health forecast in Erie County this summer, the Performing Artists Collective Alliance (PACA) will be presenting these monologues over the course of three weekends, to stream, and — yes! — for live, in-person, in-theater viewing.

"We had been limiting seating for in-person, but I believe we will be returning to full capacity for this run," said Jeff Rodland, one of the PACA founders and a regular actor, director, and producer with the theater.

He continued, "Diggit Dave Schroeder switches camera angles as the show progresses. The actors have a designated area to stay within so that they can always be in view [for online streaming]. I have not seen the online version myself, but I hear it is a totally different experience than seeing it in person."

The actors are all directing each other; Rodland is performing "I Was Right About Everything," and directing the "always-fabulous Lara Schaaf in 'Ditto,' which is a crazy coincidence story about a woman and her failed engagement to the man of her dreams," he said.

"It is a group of people that are all flawed in various ways," Rodland explained. Robert E. Martin for Review Magazine narrowed it down further, asserting that the collection of individuals — none of whom, or whose monologues, are related to the other — are all exploring "the things in life that haunt them."

The stories are bizarre at times, frank, funny, the characters unlikeable in some cases but charming, electrifying, real people you want to know more about. People you'd have questions for over a drink (or five).

Live theater is getting back to normal in Erie, and the only question left is: To be or not to be there? — Cara Suppa