'First Reformed' is a dark, depressing and brilliant experience 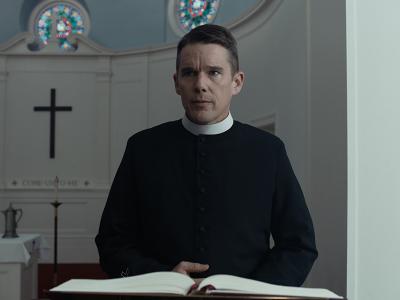 Paul Shrader's most famous work is his script for Martin Scorsese's Taxi Driver. His newest film, First Reformed, shows that he's still obsessed with the same existential quandaries from that masterful film. With at least one direct homage to Taxi Driver (itself a direct homage to Carol Reed's Odd Man Out), Shrader gives us another excellent examination of a lonely man trapped in a world that is slowly killing itself.

The film follows Ernst Toller (Ethan Hawke in a career-best performance), the reverend of a small church crumbling beneath the shadow of a colossal mega-church who finds himself shaken to his core after meeting with a radical environmentalist and his pregnant wife (Phillip Ettinger and Amanda Seyfried). This leads Toller to confront his troubled past, his own failing health, and his present conflicts with his church as well as a future that suddenly looks bleaker than ever before. As his church nears its 250th-anniversary celebration, Toller's despair may turn to violence.

The film is hauntingly beautiful, filmed in an Academy aspect ratio (1.375:1) that is simultaneously intimate and suffocating. It also asks some truly thought-provoking questions about the sheer helplessness felt against the forces of avarice and apathy, about the greed and complacency that seems so common in our hyper-capitalistic society. Most fascinating, it asks where a man of God should stand against widespread environmental devastation. Thankfully, blissfully, the film gives us no easy answers. Shrader simply sets up the discussion. "This is us," he says. "Here we are and what a sad state we're in." First Reformed comes to Erie for one night only at the Bourbon Barrel on Wednesday, November 7th at 7:00 p.m. — Forest Taylor