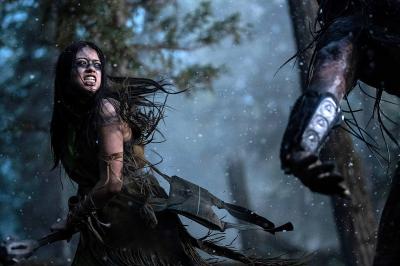 Has there ever been a film franchise with more highs and lows than the Predator series? After a genre-defining original and a fun sequel, we had a few convoluted mash-ups with the Alien films, an entertaining attempted reboot (Predators) and another reboot with the most ridiculous story imaginable (The Predator, the one with weaponized autism … seriously). Now the series goes back to the distant past with Prey. The result is, despite some pacing issues, the most interesting take on the franchise since Arnie and his friends had their jungle adventure back in 1987.

Set in the Great Plains in the year 1719, the film follows Naru (Amber Midthunder), a young Comanche woman out to prove herself worthy of joining her tribe's hunting party. The hunt takes a deadly turn, however, when the party soon learns it is being stalked by some unseen force. Naru must now use all of her skills to protect her tribe from an alien hunter who wants human skulls as trophies.

The wilderness setting gives the film a sense of danger that has been missing since John McTiernan's original classic and the pre-industrial setting feels fresh. However, the fast pace and over-reliance on CGI make the film feel less raw than it should. Also, the Predator himself is too often shown (ironic for a villain who is literally invisible). Still, the plot is engaging and most of the characters are likable, making the film as a whole an entertaining watch. Prey isn't perfect, but with how bad this series often gets, it feels like a mini-miracle. Prey is now showing exclusively on Hulu. — Forest Taylor