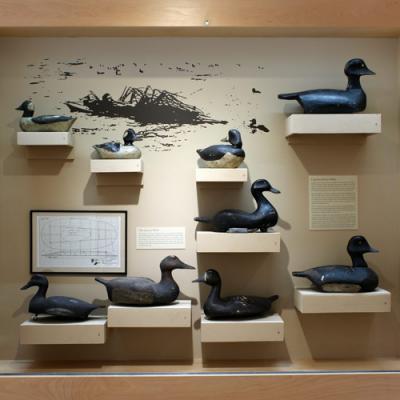 The simple, clean lines of the mostly century-old duck decoys, now on display in the Little Things Gallery at the Erie Art Museum, give them an air of modern art. Their makers, all carvers from what is now known as the Erie School of decoy carving working between the late nineteenth and early twentieth centuries, would be quite surprised to find most of them here, however. When first crafted, these decoys were designed with one thing in mind: to attract wild duck within range of a hunter's aim.

The Hahn Brothers, Robert Ebisch, K. Henrichs, Jack Sweet, Ken Chandley, and most notably Frank Buchner all carved working decoys for use on the water, not the shelf in your study. The telltale keel underneath, and connections for lines and anchors, reveal their utilitarian purpose.

Buchner is the most famous of the group and is considered the father of the Erie School. His decoys are known by their delightful folk art carving he used, along with paint, to identify a particular species.

Buchner is the most famous of the group and is considered the father of the Erie School. His decoys are known by their delightful folk art carving he used, along with paint, to identify a particular species. The stylized carvings, on the backs particularly, depict feathers and wing features.

Buchner's Bufflehead Duck Decoy is especially charming. Compact of body, this little duck sports its signatory white wedge on the back of its head, although Buchner made it wedge-shaped rather than rounded as seen in other decoys in the show by an unknown carver. He also took some liberties with the color compositions on the sides, with carved areas sporting white paint in a stylized pattern giving the decoy an agreeable charisma.

Many of the other Erie carvers followed Buchner's lead and now Erie School decoys can be identified by their carved backs, a detail exclusive to this decoy-making location, with each carver having his own interpretation in pattern and design.

Erie School decoys share another feature as well. Their ducks sport uncommonly wide bodies, designed to keep them afloat in the notoriously choppy waters of Lake Erie. These "pancake" bodies, as they're called, grow wider toward the rear and end in a squared-off tail.

Many visitors may overlook the Little Things Gallery at the museum. But in this tiny corner, great things happen. In this case, it reveals a storied tradition of ordinary people making the things they needed to earn a living or enjoy their sport. They didn't know they were creating art. But we do now.