Green Jellÿ Bring the Best of Their Worst to BT 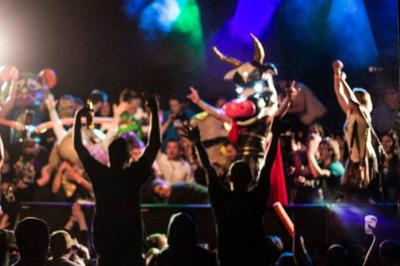 Green Jellÿ have built a career off of questionable taste, but it's not been as off-putting as one might think.

Like a hoard of Visigoth raiders, the long-running metal band from Upstate New York blazed through their local bar scene in the 1980s, capturing crowds with a charismatic but highly unrefined act. A Green Jellÿ show might (and often did) contain puppets, costumes, a rotating cast of zany characters, and/or an impromptu food fight — which burned bridges with many a tavern owner. Their lyrics were immature and their musicianship was generally unpolished (although some pretty respectable musicians, such as Tool's Danny Carey and Maynard James Keenan, are alumni), but there was a waggish charm to their shtick that audiences could not deny.

Despite self-identifying as "bad" (the band's name is pronounced "Green Jell-O," based on general consensus that lime is the worst flavor), the band's fortunes changed for the better in the early '90s as their album Cereal Killer broke through on the merit (?) of singles "The Three Little Pigs" and its title track, which follows the ravings of a blood-crazed Toucan Son-of-Sam as he massacres his cereal mascot brethren.

Shortly after Green Jellÿ had begun to peak — their video-album 333 was nominated for a Grammy and they became the first band to lend their songs to a video game soundtrack (1994's Maximum Carnage) — the band dissolved. Co-founder Billy Manspeaker re-formed (but hardly reformed) the group in 2008, and they've been touring consistently ever since, making several pit stops in Erie.

Their latest will be at Basement Transmissions, joined by fellow New Yorkers DredNeks and Erie's own Maniacal Device. Voodoo Brewery will be on hand offering libations — but no comestibles to throw on stage. Wouldn't want to burn any bridges (wink). — Matt Swanseger