New Hell is a constant bummer in the best way 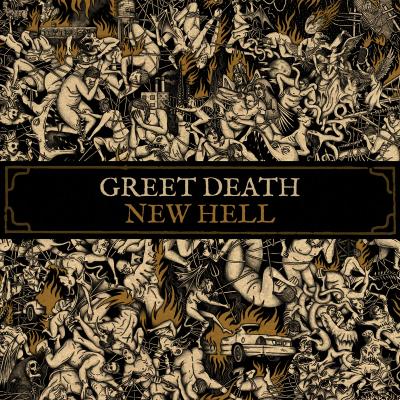 "Wanted sickness, wanted death, now you've got it … And now all we seem to love is the darkness." These are just some of the head-turning lyrics on "Strange Days," the lead single from Greet Death's sophomore LP,  New Hell. It's a heavy album, sure, but also a deceivingly catchy one that owes as much to '90s space-rock pioneers Hum as it does to their peers in Cloakroom. New Hell is a constant bummer in the best way, writing lyrics that would leave Wayne Campbell asking, "So it's not just a clever name?" Interestingly enough, the album actually starts with its weakest tracks. "Circles of Hell" and "Do You Feel Nothing" are both instrumentally sound, but suffer from mediocre vocal performances from two already eccentric vocalists. From there, however, it's smooth sailing, with the album standing on two massive 10-minute songs, "You're Gonna Hate What You've Done" and "New Hell." And sandwiched between them is the band's best song yet; "Crush" is a devastating pop song about losing touch with a lover, hung around the simple phrase, "Every single night, I dream about you."