Once you get past the surface, the classic fades 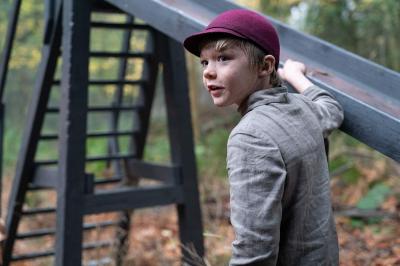 Three Stars out of Five

The Grimm Fairy Tales were used to teach children lessons about the frightening realities of the world. The captivating and usually very grisly stories were just a starting point to warn them of the dangers of wandering too far into the woods or following a suspicious stranger into their house. Director Oz Perkins (The Blackcoat's Daughter) tries to bring these life lessons into the modern world with Gretel & Hansel, and while he certainly gets the gory details of the fairy tales right, his attempts at symbolism fall flat.

The film follows a brother and sister (Sophia Lillis and Samuel Leaky) who run off into the dark woods after being threatened by their desperate mother. As they wander deeper into the wilderness, their search for food and work brings them to the home of a mysterious old woman (Alice Krige). Little do they realize that this home is the source of a great evil that wants the siblings for its own nefarious purposes.

The film is visually spectacular, drawing influences from films like The Witch and the work of Ari Aster. Much like the protagonists, we are often drawn in with the ethereal, dreamlike imagery, only to be brought back to reality with some occasionally shocking moments of gore. Unfortunately, the confused and sloppy story can't keep up with the amazing visuals. The film tries to make some connection with the villain and Gretel's growing into womanhood, but it is never quite able to realize it. If the film was half as compelling as it looked, it would be a modern classic, but once you get past the surface, there isn't much left to chew on. — Forest Taylor