Ships and passengers, like the Titanic and those aboard, sometimes represent whole societies. Their wrecks represent apocalypses often caused in part by human moral failings. 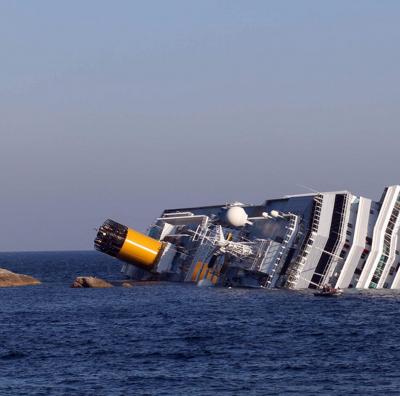 Authors have been writing about men who go down to the sea in ships almost since the dawn of writing itself. Accounts of voyages on the Mediterranean are older than the Red Sea crossing and Galilee sailing and fishing in the Bible. The sea has always, like the proverbial Chinese character, represented challenge in the way of both danger and opportunity. Ships and passengers, like the Titanic and those aboard, sometimes represent whole societies. Their wrecks represent apocalypses often caused in part by human moral failings. Moby Dick, for example, is filled with symbolism, and Ahab's ship, the Pequod, would not have sunk but for his all-consuming hatred and pursuit of the white whale.

The Costa Concordia grounded and sank January 13, 2012, just about 3 months short of the 100th anniversary of the Titanic sinking.  Thus, many comparisons were invited.  As the story emerges, one sees a combination of naval architecture in service of profit, marketing, insufficiency of technology, and human flaws contributing to tragedy.

There were 4,252 people aboard, including about 130 Americans. Thirty-two people were killed and double that number injured. Much about the Concordia accident is still not settled. The death toll might have been much greater.  After the first grounding, the Concordia was navigated, with some skill, despite loss of power, to its second grounding close to shore, and evacuation.

Speed kills, even at sea. One can only blame vehicle designers, in part, when there is absolutely no emergency reason ever, for speed greater than that at which a collision occurs. The Titanic, the Costa, the Exxon Valdez, and many others were going too fast. The Titanic had binoculars aboard, but they weren't in the lookout's position that night. And it was dark enough that they might not have helped. Once the iceberg was spotted, there might have been 4 minutes to avoid it or minimize damage. Big ships are not actually steered by their captains but lower ranked helmsmen.  This was a time of transition from sail to steam power and "tiller orders" to "rudder orders." On sailboats you turn the tiller the opposite direction from the one you want to go. But on steam powered ships, rudder orders turn a ship like a car turns. Turn the wheel in the direction you want to go.  Following captain's orders, it's still possible that the helmsman, who did not survive, tragically turned the wheel in the wrong direction.

According to a long article in Vanity Fair, "Mayhem and Mistakes as the Costa Concordia Sank," (VF, May 2012, pg 162ff.) the Concordia was "saluting the island," showboating, making a very close pass to the island of Giglio. It had done this the previous August also without incident. It's unclear whether Captain Shettino did it on his own or on instructions from the directors of Costa Crociere, the Italian company that owns the Concordia and other cruise ships. But an experienced captain, Kurt Konrad, who blogs for website gCaptain, says cruise ships do it all the time. So maybe it's unwritten corporate policy for marketing purposes, not captain's risky behavior. Costa Crociere had previously had some other disquieting accidents with its other cruise ships. It's an Italian run company, but British–American owned by the Carnival Cruise Company. Like the world as a whole, its passengers were largely white Europeans, its crew were mainly pathetically low-paid, darker-hued people from much poorer parts of the Third World. After the accident, Carnival, "CCL" on the New York Exchange, saw its stock drop from about $35 to $30, but has since recovered to hover between $32-$33.

According to Brian Burrough, the Vanity Fair author, Shettino, reckoning by eyesight, figured his turn to avoid hitting the island from the position of some rocks about 900 yards from the harbor. Lookouts with binoculars had long been replaced with an array of instruments giving all sorts of relevant information, perhaps too much information. The main navigational information comes from ECDIS, the Electronic Charts Display System, newly required by the IMO. It can display as many as 500 different type of symbols, too many for use.  Shettino admitted he had turned its alarm off, because he had traveled this course many time before.  These ships also have VH radio, GPS, rudder angle indicators, radar, AIS (automatic identification of other ships) an inclinometer (to measure list), and anemometers to measure wind speed.

There seem to be two technologies very useful to avoid what happened to the Concordia that these ships are not required to have. One is side-scanning sonar. Sonar has been in use for a long time and can help "see" underwater obstacles as radar sees surface and air objects. It can be fooled by false positive images of things not projecting up from the bottom. The other would be automatic (software) course avoidance correction that, detecting underwater obstructions, and metering all relevant parameters, would automatically give warnings that could not be turned off and steer the ship to safety. Omission of these technologies from ships the size, expense (over $1/2 billion), and carrying capacity of Concordia seems negligent to this author.

Turning onto his new course, Shettino noticed the fatal rock nearly below and left of him. He immediately ordered "Hard to starboard!" to turn away.  But going at about 15 knots (17 mph) this massive, long ship couldn't avoid its stern swinging out too far left. Realizing this, he ordered "Hard to port!" hopefully to slide off the rock or minimize any gash created in the hull. But a moment later, he commanded "Hard to starboard!" again, perhaps, to get away from the rock as fast as possible. And then the Concordia struck the rocks with fatal force.

The Concordia suffered two gashes on its portside hull 160 ft. and 230 ft. long and scraped off a large rock that jammed in one gash. It slowed, lost lights and power. As water rushed in, it began to list to port. It was only able to maneuver by momentum, rudders, maybe thrusters, and stabilizers. Thrusters are fans in ship hulls, below the water line. They assist steering in a direction by blowing water away in the opposite direction.

Video of the bridge after the lights went out appears to display some indecision. Shettino was for some minutes unresponsive to others. He was also for some time on his cell phone. Maybe he was contacting the officer who is supposed to be responsible for coordinating onshore disaster response. That has been a requirement for ships captains set by the International Maritime Organization.  The IMO was established to set standards for safety at sea after the Titanic disaster. Maybe he was speaking to an executive of the Italian managed, British-American owned Costa Crociere line.

In any case, what happened for the next few minutes seems to have violated many people's image of what should happen: a strong, decisive captain controls and directs the emergency. This follows an old maxim of the sea: "Above the Captain, [only] God."  That's not how Shettino behaved. On the other hand he is not, according to Captain Konrad, necessarily to be blamed for leaving the ship to get a better view of it from the rocks. A captain is responsible to direct onsite rescue efforts and may be able to get a better picture of the whole situation from nearby shore.

While Shettino was still on board, those on the bridge managed to get the ship turned back to shore and grounded it a second time. Here may have come the worst mistake(s) of all—the fatal ones. It's difficult with a giant ship like that, to make a decision to abandon it. While turning, the Concordia began to list to starboard. When it grounded again, it started to list more quickly. Then the "abandon ship" order was given, 68 minutes after that first collision.

Perhaps that was too late and the order should have been given before the second grounding. But Captain Konrad believes the Concordia may have let out too much anchor after the second grounding. I suppose if true, that anchors dropped without slack on the side opposite the starboard list might have helped restrict its final list. In any case, Konrad seems to think this final listing may have been what trapped and drowned the casualties below decks.

The causes of the rapid listing to starboard are yet to be determined. But to look at any of these modern cruise ships is to be struck by how top heavy they appear to be, deck piled on deck. They've been described as "barges with a block of flats on top."  They don't look seaworthy. Naval architects and the cruise line owners who commission them claim that they are seaworthy. They are wide at the beam, and largely flat-bottomed. Their drafts (depths from waterline to bottom of keel) are shallow so they can enter channels and dock. Also, the area below the water line is filled with very heavy material, enormous engines, bunkers of fuel, and/or water. The passenger upper decks are made of lighter metals. And they have a number of clever means of pumping water ballast to increase their stability. But another factor, air draft, may be a good example of design to maximize profit over safety.

One can read interesting bits about shipwrecks on a website called shipwrecklog.com. They are much more frequent than landlubber cruisers think. In particular, ferries in the South Pacific during monsoon seasons sink with alarming frequency. Often these ferries are vastly overloaded and untold passengers go to watery graves. And it's going to get worse as anthropic global warming increases the heights of rogue waves, and violence of typhoons, cyclones and hurricanes.

Ships like the Concordia and these ferries seem to this author pretty good symbols of a lot that is troubling about humans and our societies in the 21st Century. Modern cruise ships, constructed to maximize profit, are distorted, bloated, sybaritic, decadent. They show the signs of over production and excess capacity, like the excess greenhouse gases we put into the air. They're like our manufactured food with its excess salt, sugar, and fat and our resultant overweight bodies. They're like our McMansion homes: too big, too luxurious, too expensive. They're like our too-high SUVs that tip over too easily, our too-tall skyscrapers, our over-valued stock markets and casinos. Looking at them warrants a sense of foreboding.

COVID-19 Vaccine Criteria: How Obesity, Smoking, and Substance Abuse Can Be Qualifiers for Status 1a