Inflation is not everybody's enemy equally. 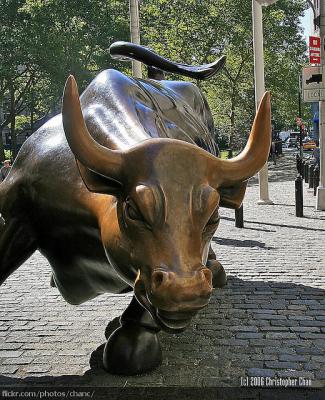 The Federal Reserve's ("The Fed's") power to set interest rates enables it to control economic expansion and contraction. Ordinarily, when the economy expands fairly smoothly, the Fed pursues primarily its mandate to keep inflation low. Inflation is not everybody's enemy equally. It does hurt people on fixed incomes. But most incomes are not quite fixed. Many rise, one way or another.

Inflation is more the enemy of Big Business, especially creditors, lenders such as the powerful mega banks, than it is of debtors, borrowers. This is because debtors, under inflation, get to pay off their fixed, nominal debts with more (cheaper) dollars than the fixed nominal amount of the debts.

Bank creditors are in business borrowing short (in demand deposits) but lending long. So they don't like inflation and they have political clout to get the Fed to raise interest rates. That stalls expansion or reverses it and workers are thrown out of jobs. Thus does this nearly invisible great power, the Fed, strongly influence whether millions of American real persons and families "do better" or worse, sometimes throwing them into unemployment and poverty.

But the collapse of 2007 – 2009, although there have been at least 40 earlier ones in history, was no ordinary time. How much money did the Fed provide to the irresponsible, gambling, biggest banks, insurance giants like AIG, and investment houses to recapitalize them?  This is according to a Government Accounting Office report, 11-696, June 21, 2010 (available online under the title "Opportunities Exist to Improve Policies and Processes for Managing Emergency Assistance".)  The Fed loaned the banks, including foreign ones, a total transaction amount of $16.1 trillion!

That staggering total includes what many would regard as duplicate loans, the same number of billions of dollars of "overnight money," e.g.,  to maintain a bank's required reserve, $10 billion loaned and repaid each 24 hours for 30 days. Bloomberg News, deducting duplicates, still puts it at $7.7 trillion in low interest loans and currency swaps.

Compare that to $7 - $13 trillion lost in the collapse. Compare also to the Bush administration Treasury Department "bailout" of only $700 billion. Compare it to Bush's stimulus money  to real American citizens, which provided only a $250 "Go Shopping" sum by Social Security checks. That totaled about $152 billion.

The Obama administration got Congress to approve another stimulus that appeared much larger, $787 billion, about one third in tax cuts, for about 94 percent of workers. So the two stimuli together ($152B + $787B) added up to less than $1 trillion! There is no way less than $1 trillion (a total only passed in legislation and publicized to make the government look responsive; some never actually provided to people) could replace $7 -$13 trillion and 8.5 million jobs actually lost. It was like fielding a 3-year old and a 98–pound weakling in a cage fight against a whole pro-football defensive line. But Republicans and Democrats and "news" media were almost all silent. None of them thrust this comparison into the public's headline consciousness.

Banks have always made some of their money on the spread between the lower interest rates they pay on their deposits and the higher rates they charge for loans.  Having damaged or destroyed their own capital by speculation, the Fed nevertheless loaned them $16 trillion at rates as low as three-quarters of one percent (.75).  The banks then relent the money at commercial rates that could be anywhere from 5 or 6 percent to much higher.

Where, reader, you human American citizen person, is your near – zero interest loan to refinance your high interest mortgage or make the post due payments to avoid foreclosure or supplement your income cut by job loss or retirement account loss? If you hadn't been hurt financially, your added consumption would be creating jobs for the unemployed.

This differential treatment of Americans versus Big Corporations can in no way be excused solely on the basis that the corporations were "Too Big to Fail."

Bankruptcy isn't death. Reorganization frequently fires top managers, but in very large, nearly – utility service institutions like banks, many workers are reorganized into other businesses and don't lose their jobs. In this case, the Fed's and government's actions have not recovered money from any significant number of top executives. But the  preferential service of the big financial institutions over real Americans should cause more outrage than even the $700 billion bailout or than the bipartisan failure of the government to prosecute any significant number of the overpaid executives or recover from them.

How well the Fed has recapitalized the big banks is documented in a report by economists Robert Pollin, et. al., of the Political Economy Research Institute entitled "19 Million Jobs for American Workers." The report points out that banks now have $1.6 trillion in excess reserves on deposit at the Fed. One trillion, four hundred billion dollars, leaving a cushion of $200 billion in reserve, could create 19 million reasonably paid jobs. These could be in such vital areas as infrastructure improvement, health care, education and social services.

The reserve figure can be verified by checking the major Fed Report on national accounts, the "Flow of Funds" report z1, for September 2011,  which shows (Table L.109, Monetary Authority, Line 28, Liabilities  [of the Fed to the banks] for 2011, Q3 $1,597 billion.) Corporations have another $2 trillion excess cash. But it is not private corporations' responsibility to provide full employment. Congress explicitly assigned that responsibility in part to the Fed, and mainly to itself in Full Employment Acts of 1947 and 1976.

Corporations remain cautious about hiring because they don't see how goods and services produced by additional workers could be profitably sold, given how much wealth of consumers they destroyed in the collapse. Executives are now being much more cautious and responsible to their stock holders and extending less credit.

Thus the power of the Federal Reserve to create any amount of money, just by keystrokes on a computer, and put it into the economy without serious inflation, is a power to resurrect the entire Big Business economy. The Fed was created by and can be modified by the Congress. It could be ordered to create trillions of dollars to make low interest loans to home owners to pay off their mortgages, to tide over the unemployed, and to help entrepreneurs start businesses instead of endlessly subsidizing big corporations.

Alternatively, as done twice in American history, the Congress could coin its own greenbacks, government money created without giving the Fed Treasury debt. In the context of revolution and civil war, with existential threats, this was inflationary. Today, to reflate housing, employ the unemployed, provide sounder financing for Social Security, Medicare, education, etc. and help individual entrepreneurs, it would not need to be so.

We, the real American citizens tried twice to make our government more responsive. At the presidential election of 2008 we gave a sweep, or wave election victory to the Democrats. They could have, on the first day of the opening Senate session, lowered the 60 vote supermajority requirement to vote on bills. They did not do so. I believe they did not even try. Then we gave conservative Republicans a wave election to the House in 2010. They have not succeeded in their promises either.

And so the Unholy Alliance of Big Government and Big Business continues to have a dismal degree of influence on the lives of 300 million of us real American citizens.