Hamlet and Shrew Get a Makeover at Frontier 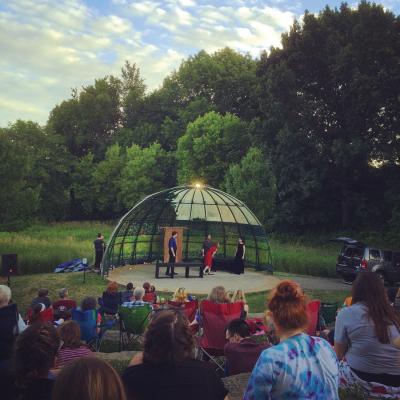 Whether or not you've delved into the realm of characters that Shakespeare had to offer, let it be known that it's never too late to start … especially when the characters are modernized and must deal with issues present in 2019. The best part of this experience is simple — you get to watch all the hilarity and drama unfold at Frontier Park.

Perhaps watching a live stage performance outside is new to you, but if you've been to one of the Shakespeare Summer Nights performance before, then you know that the directors and actors bring new light and laughter to these classic tales.

Alaina Manchester, director of I Am Hamlet (as Written and Performed by Hamlet), explains that this "play is an adaptation by Mark Jackson in which one actor, portraying Hamlet, goes on to also portray multiple characters and act out selected scenes from Hamlet. The premise is that the audience meets the characters of Hamlet ... when they are not being performed, and Hamlet gives a first-hand account of his story as well as his notions on the theatre, love, death, life, and family."

With so many tales and adaptations to choose from, it seems important to understand what drew Manchester to this particular story. She enlightens, "I love the story of Hamlet and I really love adaptations that pay homage to the original while asking new questions or allowing us to view the source material in a new light. I also thought it would be a delicious challenge for an actor to do a one-actor production of the story."

A delicious challenge indeed, especially for the local actor who happily accepted. "Our Hamlet is Adam Rossi. He is a force of nature, pure energy! He has to transform into, at one point, six different characters in one scene, whilst performing a two-person sword fight, with himself. Not only does he have to become multiple characters, he has to become those characters as they would be played by Hamlet himself. It's a very layered and physical portrayal and I am so happy to work with Mr. Rossi on this show," affirms Manchester.

In addition to Hamlet's adaptation, The Taming of the Shrew is also receiving a modern-day makeover, showcases a cast of all women, and is directed by Jenna Westfall. "The Taming of the Shrew is a problematic story, especially as we look at it through our 2019 sensibilities. We were intrigued by how or even if we could take the original script and flip it on its head through a process of ensemble devising to find out how the themes are still relevant. Ms. Westfall's cast brings their own experiences into the devising process to shape the story to create an exciting new piece of theatre," states Manchester.

Who would have thought that Shakespeare's stories and characters would continue to be relevant in the age of technology? Well, put down your phone and come witness it for yourself. — Kalli Oberlander