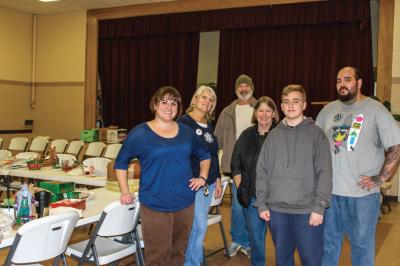 "Tis the season." These words can mean a lot of different things to a lot of different people, but regardless of context, it's the hallmark phrase bandied about around this time of the year when most of us shift from carving turkeys to making and checking gift-getting and gifts-giving lists at least twice.

Aside from thinking about our own personal gifts — the ones we'll give to those we know and receive from those who know us — we tend, too, to think of others outside of our immediate social circles in need.

Need immediate proof? After Black Friday comes Cyber Monday, and following that is #GivingTuesday, a day dedicated to digitally reminding us that the spirit of the holiday season goes beyond big box stores and online deals.

Whether you cite a stronger economy or growing compassion, Americans have given more over the past two years. According to Nonprofits Source, Americans gave $410 billion in 2017, a 5 percent increase from 2016. And in 2016, Americans gave 4 percent more than the year before.

Too, Americans give more than simply from their bank accounts. They donate their time.

Nonprofits Source reported the national value of volunteer time at $24.14 per hour, meaning that in 2016, Americans contributed $193 billion of their time to the communities in which they live, work, play, and give.

Erie is no exception. A host of places and events offer locals the opportunity to embrace their empathetic tendencies, whether that's valued in money and goods or time and service.

In Erie there exist legacy institutions with roots more than a hundred years deep, as well as others just beginning to branch out to help the more than one in four Erie residents living at or below the poverty line. Of the former, Erieites can look to the Erie City Mission. Of the latter, the Erie Free Store.

While we at the Reader are using this as an occasion to encourage our readers to find outlets to support or engage with — whether it's donating goods, contributing financially, or volunteering time — at any level they can, here's a look at two organizations with notable impact and ample opportunities to contribute to. There are plenty of additional organizations and institutions out there. We encourage you to share their stories and their work with us and the community. 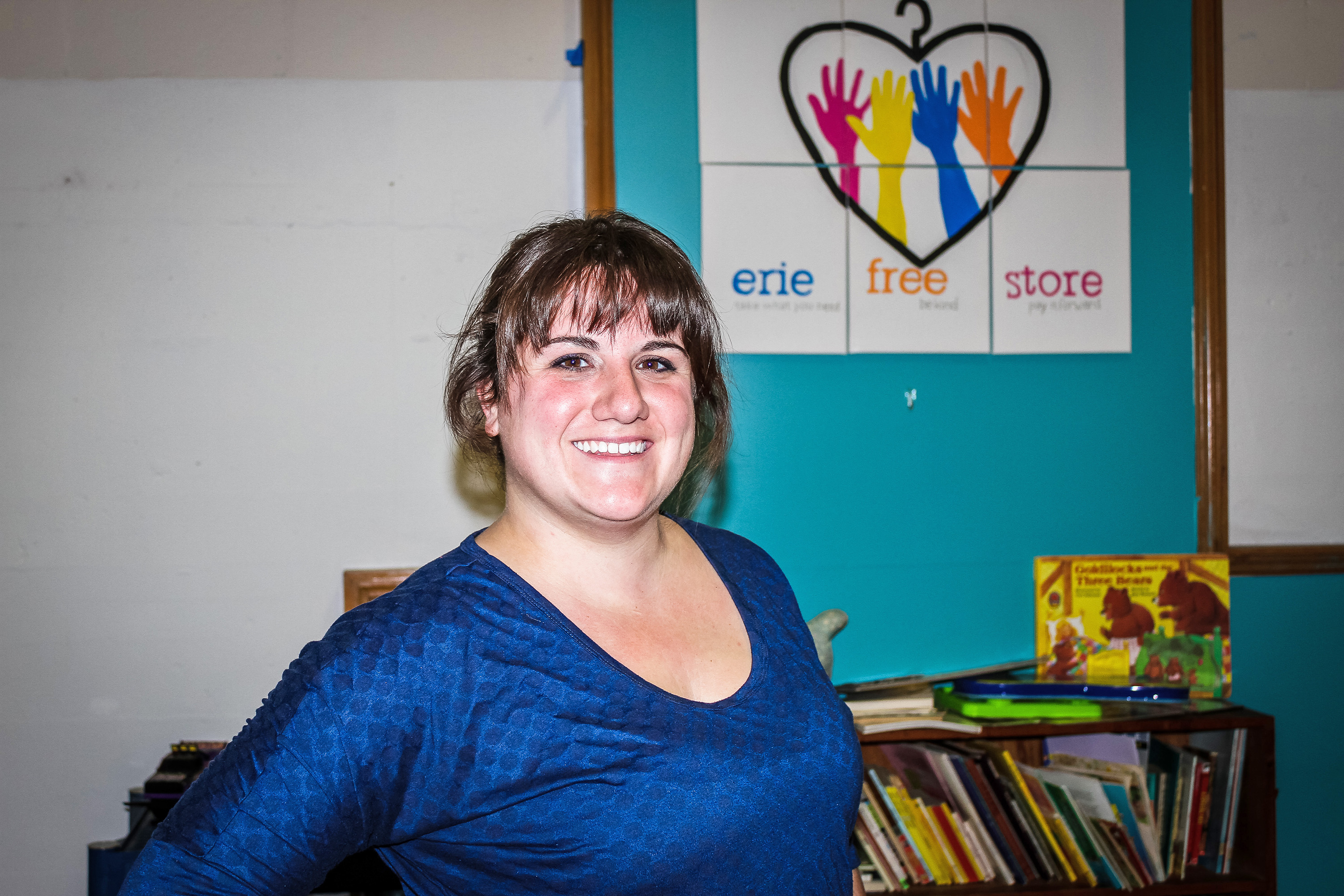 Housed in the Elmwood Avenue Presbyterian Church, the Erie Free Store "is a store that is entirely free!" director and founder Breanna Adams notes emphatically.

Adams, an Erie Reader 40 Under 40 alum and employee of the Erie County Department of Health, founded the Erie Free Store in November 2016 after learning about Gisele Fetterman's Free Store 15105 in Braddock, Pennsylvania. She read an article about Gisele's husband, John, the mayor of Braddock, who, at the time, was running for the Democratic bid for U.S. Senate to face Republican incumbent Pat Toomey. John, who lost that Senate race but went on to win his bid for Lieutenant Governor of the Keystone State in 2018, mentioned the work his wife does, and that piqued Adams' interest.

"After looking it up (I found at that Gisele had) started a store where donations were redistributed for free and it has grown to receive donations from retailers that cannot be sold," Adams says. "These donations would otherwise be going into the dumpster. I called Gisele, who offered great advice, and got the ball rolling."

Two years later, Adams has built a core team of six volunteers who've volunteered nearly every week for the past two years, helping to assist the average of 50 to 60 families who visit the store weekly to obtain a wide range of goods. Volunteers mostly sort donations, stock the store, and assist customers.

Donations to the Erie Free Store are accepted on Mondays from 9 a.m. to 1 p.m. and 4 to 7 p.m. The Free Store accepts donations mostly consisting of clothing, blankets, linens, shoes, purses, toys, and kitchen items. The store does not accept large electronics or furniture.

"One of our busiest weeks there were 80 families there!" Adams says. "The amount of donations has been endless — Erie is the most generous place in the world."

Those looking to connect with the Erie Free Store — to learn more, to find out about volunteer opportunities, or to make a donation — can find them on Facebook (www.facebook.com/ErieFreeStore), where the team uses the page to post what items they're running low on, as well as updates on what they're well stocked up on, or send an email to ErieFreeStore@gmail.com. Adams also posts volunteer opportunities on the Get Connected Portal through United Way.

The most rewarding thing about the Erie Free Store to her and her team, Adams says, is "when someone finds just what they were looking for. The smiles on those people make every second worth it, and their whole day — or maybe even week — has been made better."

For more than a hundred years, the Erie City Mission has endeavored to address hunger, homelessness, and addiction.

The City Mission, as Chaplain Andy Kerr tells it, "started in 1911 as a result of a revival put on by Bill Sunday, the baseball player-turned-evangelist." The story goes that Sunday, who had a promising professional baseball career in the 1880s with the Chicago White Stockings and the Pittsburgh Alleghenys, had a conversion experience, pivoting his point of focus from sports to ministry. Thus begot out of his rallies the Erie City Mission, with the purpose of "restoring hope and transforming lives (by) cultivating a community of new life, breaking the cycle of hopelessness, and building the Kingdom of God," according to Kerr — who is also a professional life coach.

"We're touching lives every day at various speeds," Kerr says of the Mission's dozen programs serving men, women, and children. In addition to the leadership team of seven and staff of 50 full-time and part-time employees serving the Mission, volunteers (3,000 last year), Kerr notes, are a large part of how the Mission can diversify its services, ranging from addiction recovery programs to its shelter service to its Urban University aimed at improving the academics of at-risk youth to serving three meals per day 363 days of the year.

"There are two days when we don't do a public lunch: Thanksgiving and Christmas," Kerr explains. "Many other organizations offer a lunch that day, so we've partnered with them," noting that the Mission still feeds shelter guests those days. That's part of the Mission's mission, too: Building strong partnerships as not to duplicate services in the community.

Between partnering for those two days and serving public meals the remainder of the year, the Mission cooks up, on average, 15,000 meals per month, according to Kerr. That's done with just two full-time cooks along with volunteers and participants of the Mission's addiction recovery programs.

While the Mission is open 365 days of the year, around the holiday season "there's an increased need because everybody wants to provide for their families around the holidays," Kerr says. "We gave away almost 1,300 turkeys at Thanksgiving for the turkey bank giveaway."

People can donate the usual needed items — food, clothes, toiletry items, and furniture — to the Mission, but "what people may not realize is that they can donate vehicles, houses, rental properties, stocks, bonds, and of course money. We've seen it all and it is all very helpful!" Kerr explains.

Like the Free Store, the Mission cannot accept appliances.

Those looking to volunteer at the Mission should call 814.452.441 or visit the Mission online at www.ErieCityMission.org. Volunteers will go through an orientation and have the opportunity to explore the various ways to contribute, including spending time in the donation center, in the thrift stores, in the addiction recovery programs for men and women, the Mission's kitchen, and Urban University.

"Everybody is more giving around the holiday," Kerr says. "Our struggle is when January, February, March hit. People say, 'I volunteered over the holiday, I'm done.'"

Which is a friendly reminder that while giving and volunteering feel great this particular time of the year, that feeling needn't be exclusive to November and December — and the Mission, along with the Erie Free Store and myriad other charitable organizations, serve the community year-round.

'Tis always the season — now is just a great time to kick off a year of donating, volunteering, and serving.