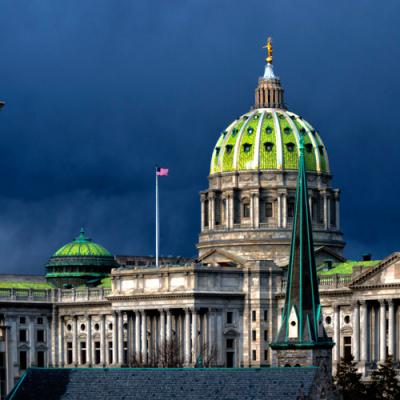 With the state spigot turned off for school districts, human services providers and just about every other organization with a state contract, the funding drought is real and Erie residents don't have to look very far to see those implications.  Nearly twenty-thousand post-secondary education students have begun to arrive at our four area institutions without any state financial aid in tow. Students across a dozen or so districts in Erie County will sit behind desks under a cloud of uneasiness as to how long the district can survive without state subsidies.  Most smaller human services providers are nearly maxed out on lines of credit and counties are re-doing the math each day that passes.

Near the end of August, the GOP and the Administration had an exchange where a Republican pension reform proposal was swapped for a concession specific to an increase in basic education funding, a priority of the Administration.  The jury, in this case an actuarial note, is still out on whether that pension reform proposal is even likely to tackle the every-growing unfunded liability of the Commonwealth or make good fiscal sense in the long-term.

During that same exchange, one very important discussion that flew completely under the radar of the media centered around an absolute refusal to further any discussion of a severance tax on natural gas drilling.  The GOP made it abundantly clear that a severance tax is off the table.

So how then does the General Assembly aim to address the need for additional revenue outside of a property tax increase knowing full well that the Administration and the voters across this Commonwealth have been championing property tax relief?

How can Pennsylvania restore the recent cuts and rise from the bottom of the ranks in the nation in education funding without a dedicated mechanism to do so?

Why is it fiscally responsible to remain the only gas producing state in the nation without a severance tax?

It is imperative that there is a continued focus on property tax relief as we are faced with record numbers of delinquencies across this Commonwealth.  People cannot pay their property taxes now, and knowing that but still asking them to pay more doesn't provide an ongoing strategy of sustainability.

It is additionally essential that responsible education funding remains at the forefront of these discussions.  If Pennsylvania aims to educate our future workforce in a way that is most beneficial and profitable in the long-term, the General Assembly must then provide the means by which to accomplish that goal and also establish the methods to address the necessary efficiencies at the district level.

The last week of August, the House of Representatives returned to voting session under rumor and speculation of a line item veto override, where a three-quarters majority vote is necessary.  The funny part of that is that the Commonwealth budget bill wasn't vetoed line by line, rather, as a complete bill, rendering the attempt of a line-by-line override unconstitutional and another delay of substantive progress.  Three-quarters majority would make affirmative votes by House Democrats necessary to turn the tide and leadership had indicated that just wasn't plausible. As suspected, all attempts to further a line item veto override failed, but not without much posturing and grandstanding by members.

Everywhere I go, and I mean everywhere, people share their thoughts about the budget impasse, and when I respond that negotiations are continuing, I see the indifference in their eyes. I completely understand why there is an inherent disinterest in government and subsequent voter apathy.

Priorities like education funding, property tax relief, investment in our human services, and the long-term viability of this Commonwealth shouldn't differ enough to be an impediment to collaboration. After all, regardless of our respective party affiliations, we all serve the same people: Pennsylvanians. And Pennsylvanians deserve better.

Senator Sean D. Wiley can be contacted at SenatorWiley@PaSenate.com, and you can follow him on Twitter @SenatorWiley.