Wrock the night away with Harry and The Potters 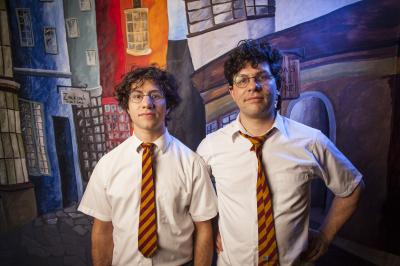 harryandthepotters.com
Boston-based Harry and the Potters featuring Joe (left) and Paul DeGeorge, founded the genre of wizard rock in 2002, inspired by the Harry Potter series of fantasy novels by J.K. Rowling.

NOTE: This event, as well as all other Erie County Library events though March, has been canceled.

The band was created in 2002 in Boston by brothers Joe and Paul DeGeorge, who together came up with the concept of Harry in his seventh year at Hogwarts forming a band with his younger self. It did not take long for other fans of the series to come up with their own bands, thus creating the genre wizard rock, or "wrock." Joe DeGeorge reflected on the creative minds that exist amongst Harry Potter fans. "We didn't have a scope of what the fandom was capable of becoming," he said, referring to when the books were first published and the bands started forming. "We were very touched that people started their own concept bands, and it grew into such a blossoming community."

As it turns out, the DeGeorge brothers are well acquainted with Erie. Harry and the Potters played at Presque Isle's Rotary Pavilion in 2006, and they enjoyed it so much, Paul and his wife got married here. "She's from Kansas, and they wanted to have a wedding somewhere in the middle, so they got married in Erie in Waldameer Park. They got married on one of the roller coasters," Joe recalled.

The Potters will be performing in the Children's Story Time Room of the library, welcoming witches and wizards of all ages. This was in fact how the band started, by playing in libraries, book stores, and for children's birthdays. "Playing to children really appealed to us because they react to rock and roll in the most natural way, unfiltered and unjaded." Parents should just be mindful to remove any wands or witch hats before anyone starts dancing. — Claudia Rose