Haunt Boos on the Brig for a Halloween Shindig 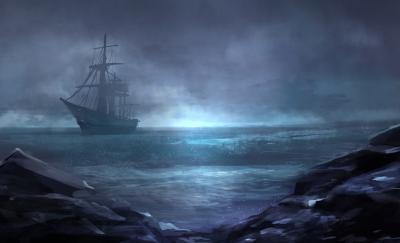 There are a few sights in Erie's bay that typically cause any and every adult to spontaneously "ooh" and "ahh" without fail: first, the undeniably beautiful sunsets, whose photos could fill a hundred coffee table books; and second, the U.S. Brig Niagara, Erie's vivid link to her maritime past, which was first launched in 1813, has received many restorations since, and now serves as an ambassador to our corner of the Great Lakes region.

The organization behind the U.S. Brig Niagara — The Flagship Niagara League — has not explicitly stated that the ship is haunted, but with so much history behind her — isn't it at least possible? And that makes the Brig Niagara the perfect spot for a Halloween shindig, with the aptly titled Boos on the Brig.

Set on the Niagara and in the immediate outdoor Bayfront area, guests can come aboard for live music, outdoor games, craft beer wagons, specialty Halloween cocktails, haunted ship tours (maybe it is true!), a Chinese auction, and a costume contest with some awesome prizes. All of this is included in the ticket price, but ghouls who get the munchies can buy additional treats from the food trucks, including the Whole Foods Co-op's SorcERIE truck, which will be on hand for the evening.

Not only will this be a wicked fun party, it will also serve as a fundraiser to help support the Flagship Niagara League and keep the Brig Niagara in the best possible shape for — who knows? — the next 200 years. Nothing spooky about that! — Cara Suppa