HBO's Perry Mason Puts a Strong Cast to Good Use 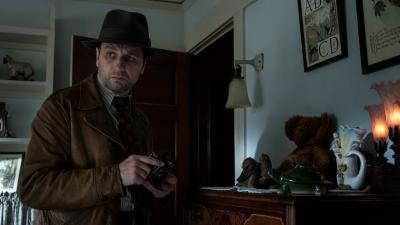 I have to confess something — I've never seen a single episode of the classic Perry Mason, nor have I ever read a novel by Erle Stanley Gardner. And I'm not big on courtroom procedurals either. I decided to check out HBO's reboot of the franchise on the strength of the cast. And it's primarily the cast that makes the show worth watching.

In the underwhelming first episode, we're introduced to pre-law-degree Perry as a very stereotypical film noir antihero. He's living with PTSD from the first World War, he drinks too much, he's estranged from his family, and he may just have a heart of gold. Sound familiar? It is. But the cliches become peripheral once the central mystery takes center stage in later episodes.

Perry Mason reminds me a bit of HBO's Boardwalk Empire, not only because they're both delicately staged during a similar time period (Mason opens at the tail end of Prohibition, in 1932). Both are entertaining and fun to look at, and both occasionally succumb to predictable characterizations and awkward attempts at social significance. There are promising elements in Mason's first season, especially the twisting and turning of its central legal battle. But it's the impressive cast of familiar faces that really brings it to life.

Our hero is Matthew Rhys of FX's underrated The Americans, and he's as good in the down-and-out '30s as he was in the Cold-War '80s. A Boardwalk Empire alum, Shea Whigham, shows up as his partner, looking and acting like he just stepped away from a breadline during the Depression. Orphan Black's wonderful Tatiana Maslany portrays an eccentric Christian evangelist, and '90s art-movie icon Lili Taylor is cast as her mother. You'll also recognize the bad guy from Terminator 2, the "stapler guy" from Office Space, Sheila the She-Wolf from GLOW, and the main guy from Max Headroom. They're all doing great work here.

Perry Mason isn't going to change the media landscape. And it's occasionally bogged down by "gritty" origin story cliches. But it's mostly engrossing as a mystery and it gets better as it cooks along. Maybe by next season it'll transform into something great. — Dan Schank